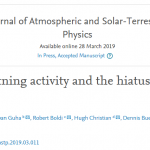 Share this… Facebook TwitterA new study by Williams et al appearing in the Journal of Atmospheric and Solar Terrestrial Physics shows that the global warming hiatus of the early 20th century was in fact real. Image cropped here. Hat-tip Mary Brown A number of scientists from the alarmist camp like to insist that there had […]