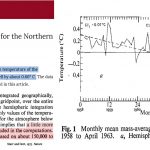 Share this… Facebook TwitterBack in 1975, when there was still considearable concern about decades of Northern Hemisphere cooling, the National Academy of Sciences (NAS) announced in their report that the end of the current interglacial could arrive sooner than thought. “[T]here is a finite probability that a serious worldwide cooling could befall the earth within […]