Geothermal heat flux can foment upper mantle temperature anomalies of 800–1000 °C, and these extreme heat intensities have been found to stretch across 500 km of central-east Greenland. This could result in “a significant contribution of ice melt to the ice-drainage system of Greenland” (Artemieva et al., 2019).

Active volcanoes spew 380°C sulfuric acid and “metal-laden acidic fluids” into the bottom waters of the world ocean on a daily basis. In other words, literal ocean acidification is a natural phenomenon.

The carbon dioxide concentrations present in these acidic floods reach “astounding” levels, dwarfing the potential for us to even begin to appreciate the impact this explosive geothermal activity has on the Earth’s carbon cycle (Kelley, 2017).

Just as impacts of sea floor volcanism may be largely unheralded, the ice-melt significance of high geothermal heat flux beneath the polar ice caps may still be in the early stages of exploration.

The geothermal heat contribution to the basal melt rates of Antarctic glaciers is substantial. 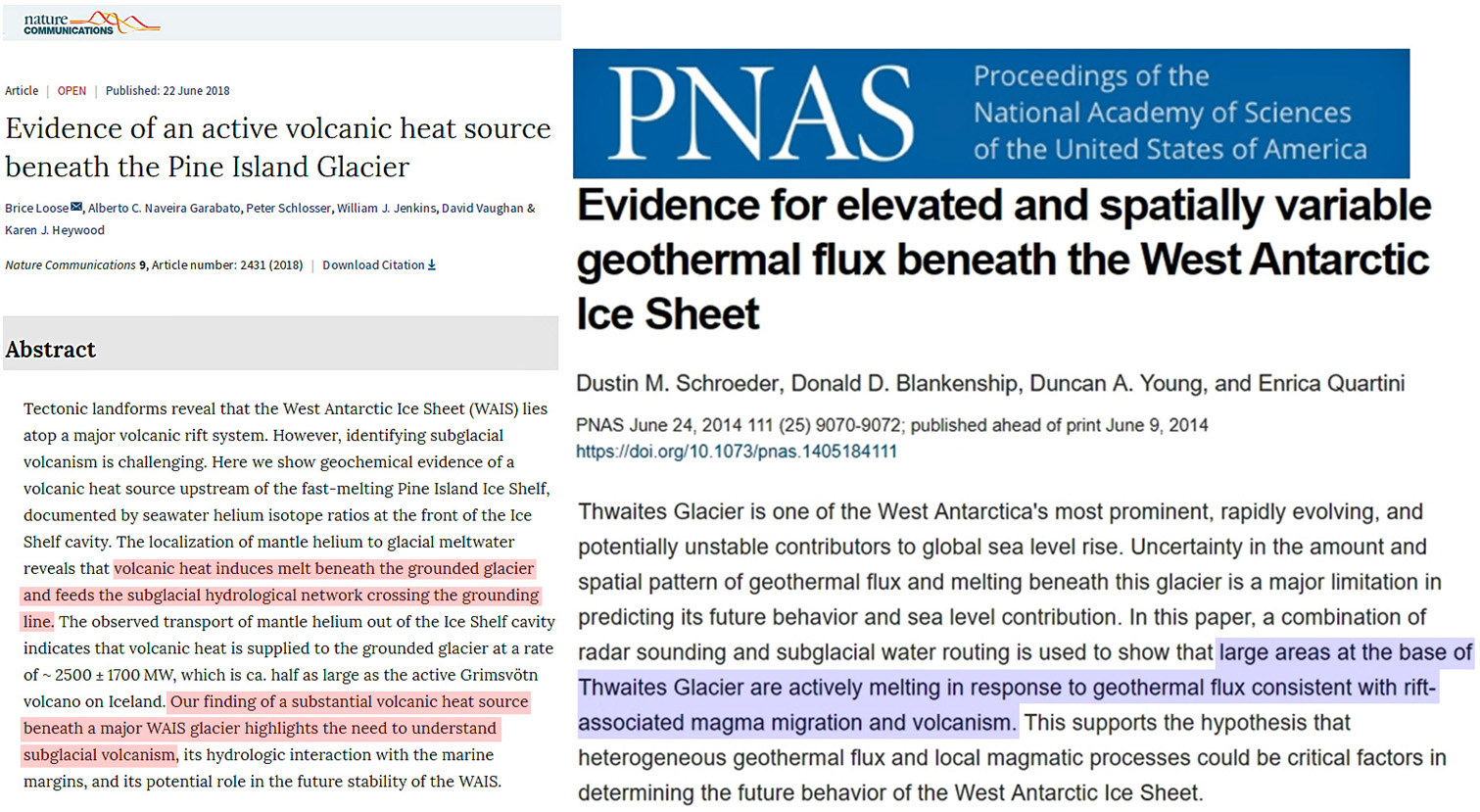 Significant melting at the base of the north-central and northeastern Greenland ice sheet occurs in close proximity to high geothermal heat flux regions, and “several thousands” of 55-62°C hot springs have been identified “all over Greenland.” 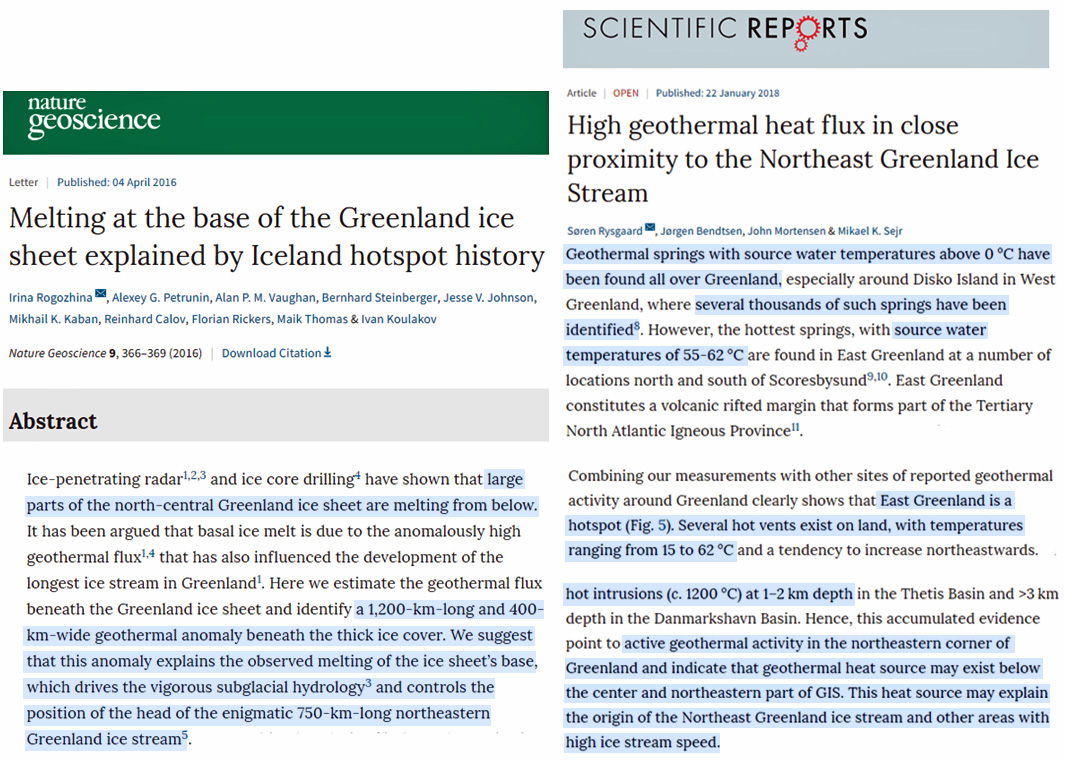 Geothermal heat flux is suggested to be “an important contributor to the Northeast Greenland Ice Stream in Central Greenland.”

flux in Greenland from a new thermal isostasy method

“In East Greenland this anomalous belt merges with a strong GHF anomaly of >100 mW/m2 in the Fjordland region. The anomaly is associated with a strong lithosphere thinning, possibly to the Moho, that requires advective heat transfer such as above active magma chambers, which would accelerate ice basal melting. The anomaly may extend 500 km inland with possibly a significant contribution of ice melt to the ice-drainage system of Greenland.”

“The present results also show a huge temperature anomaly in the upper mantle of central-east Greenland (Domain 3) with the amplitude of ca. 800–1000 °C with respect to the cratonic stations. Such a temperature anomaly cannot be explained by conductive nor radiogenic mechanisms.”

“A high heat flux from the Earth’s interior enhanced by a hot fluid percolation above active magma chambers at the edge of the ice cap may have dramatic consequences for ice basal melting in the central-eastern Greenland, and may be an important contributor to the Northeast Greenland Ice Stream in Central Greenland.” 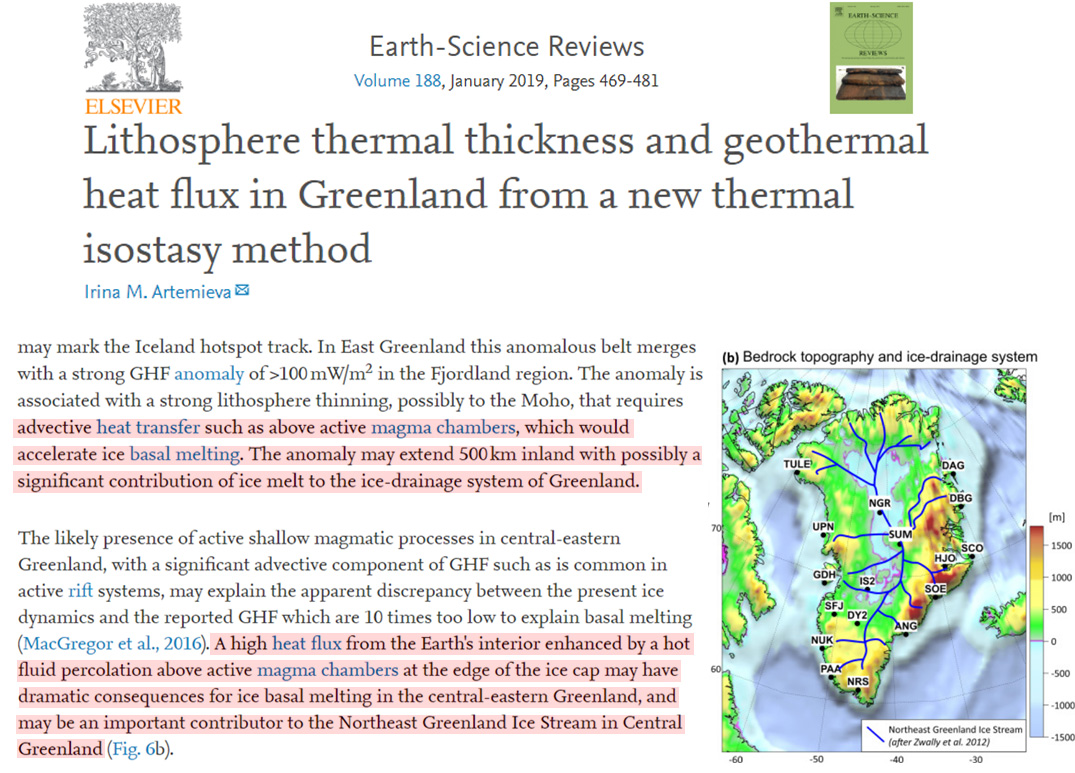