A new 5680-year tree-ring temperature reconstruction for southern South America (Lara et al., 2020) reveals (a) no clear warming trend in recent decades, and (b) the 18th and 19th centuries (and many centennial-scale periods from the last 5680 years) had much warmer temperatures than today. 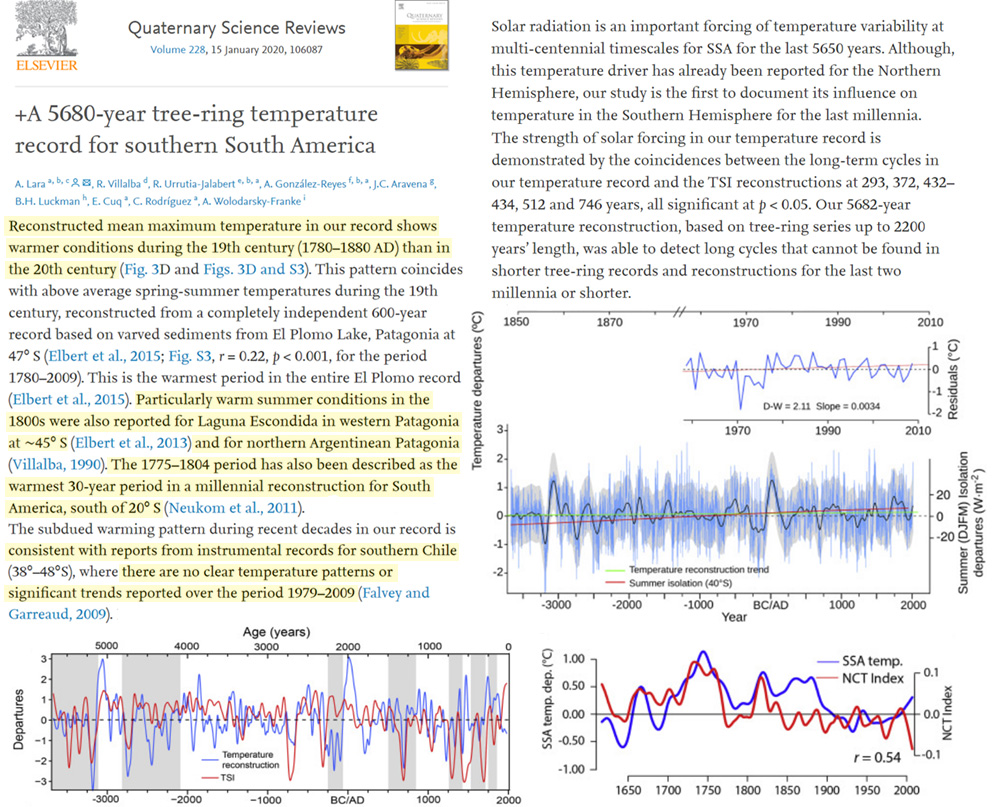 In addition to finding modern temperature changes in southern South America fall well within the range of natural variability in the context of the last 5680 years, Lara et al. (2020) assess solar forcing to have contributed to climate variations for this region of the Southern Hemisphere.

The authors find CO2 fertilization can explain trees’ improved water use efficiency and tree-ring growth in general; this affects the capacity for tree-rings to be a proxy for long-term temperature variability.

They emphasize this composite tree-ring record is “the longest in the Southern Hemisphere.”

“The subdued warming pattern during recent decades in our record is consistent with reports from instrumental records for southern Chile (38°–48°S), where there are no clear temperature patterns or significant trends reported over the period 1979–2009 (Falvey and Garreaud, 2009).”

Consistent with the patterns documented in this paper, low frequency reconstructed cold temperature anomalies for the NH and periods of minimal solar activity were variable with periods of coincidences and discrepancies during the last 1200 years (Anchukaitis et al., 2017). Changes in large scale NH circulation are thought to provide a possible mechanism for these differences (Anchukaitis et al., 2017). The two major periods with positive anomalies in our reconstruction (3140–2800 BC and 70 BC-150 AD), coincide with positive anomalies of solar irradiance, but the deviations in the TSI are proportionally smaller in the latter period (Fig. 5A).

“A strong CO2 fertilization effect has been the main explanation for the significant increase in water-use efficiency (WUE) reported for Northern Hemisphere temperate and boreal forests over the recent two decades (Keenan et al., 2013).”

“The increasing growth trend and decreasing isotope discrimination in Fitzroya have been attributed to a raise in photosynthetic rates, which has been caused by increased CO2 and/or higher surface radiation, the latter associated with a reduction in cloudiness in a high precipitation area (Urrutia-Jalabert et al., 2015a). In the eastern slope of the northern Patagonian Andes, Argentina, under lower rainfall and cloudiness than in the Chilean western slope, a marked increase in Fitzroya tree-ring growth during the 20th century has also been recorded and attributed to increased CO2 concentration (Lavergne et al., 2018). The coincident Fitzroya growth patterns in two areas of contrasting cloud cover is an additional support for the attribution of CO2 fertilization in this species.”

This cooling record is consistent with instrumental records from the dozens of temperature stations all across the central and southern regions of South America which also show cooling/no warming in recent decades (Lansner and Pepke-Pedersen, 2018). 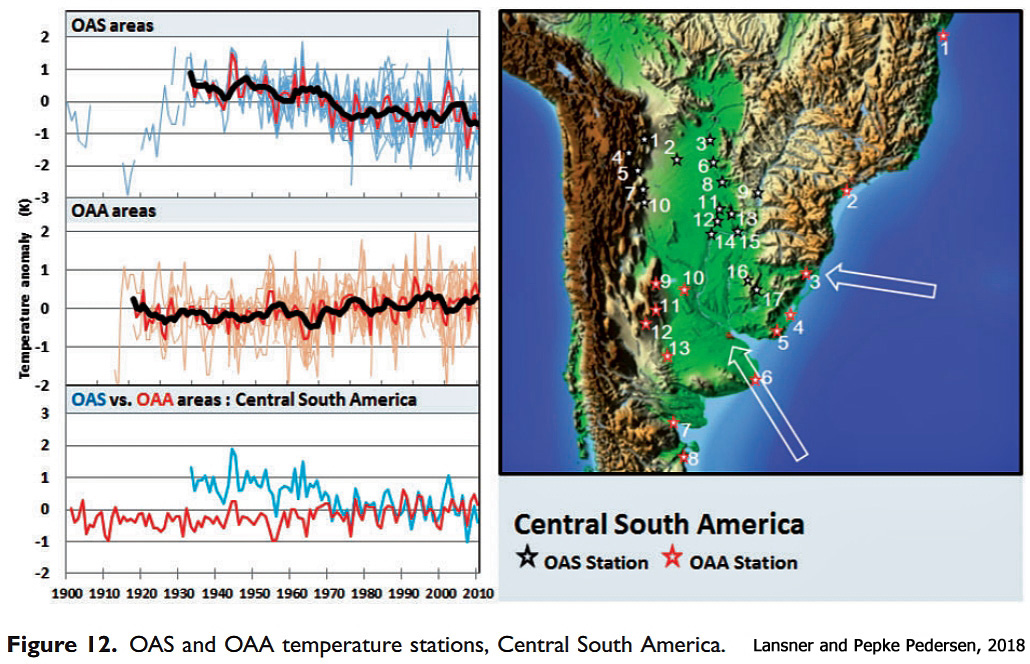