1. Models run too hot and yield “unrealistically high” estimates of the climate’s sensitivity to CO2 forcing.

“All model runs warmed faster than observations in the lower troposphere and midtroposphere, in the tropics, and globally. On average, and in most individual cases, the trend difference is significant.”

“[W]e present evidence that the distribution of ECS [equilibrium climate sensitivity] values across the model is unrealistically high.”

2. Models can’t decide if cloud feedbacks are positive or negative. Half think they’re positive, the other half negative.

“Very intriguing is however, that 7 out of 13 models show positive ΔR [cloud feedbacks] in the Arctic while the other 6 have negative values. This implies that half of the models analyzed here simulate local runaway climate systems in which the gain of energy is larger than the loss of energy if advection is not taken into account. These models increase the initial radiative perturbation rather than to reduce it. On the other hand, models exhibiting little warmings tend to be dominated by the negative Planck feedback and can be brought back to radiative balance without the contribution of advection.”

“A relevant case study by Lee and Ouarda (2010) concluded that predictions of decadal streamflow extremes using the NAO as a covariate were impacted by large uncertainty to the point of almost being non-informative.”

“From a systematic investigation of long-term rainfall records, corroborated by simulation results, we have verified that local trends have poor out-of-sample performance, being outperformed in their predictions by simpler models, as the local mean. This empirical finding suggests that the large inherent variability present in the rainfall process makes the practice of extrapolating local features in the long-term future dubious, especially when the complexity of the latter increases. This in turn questions the theoretical and practical relevance of projections of rainfall trends and the grounds of the related abundant publications.” 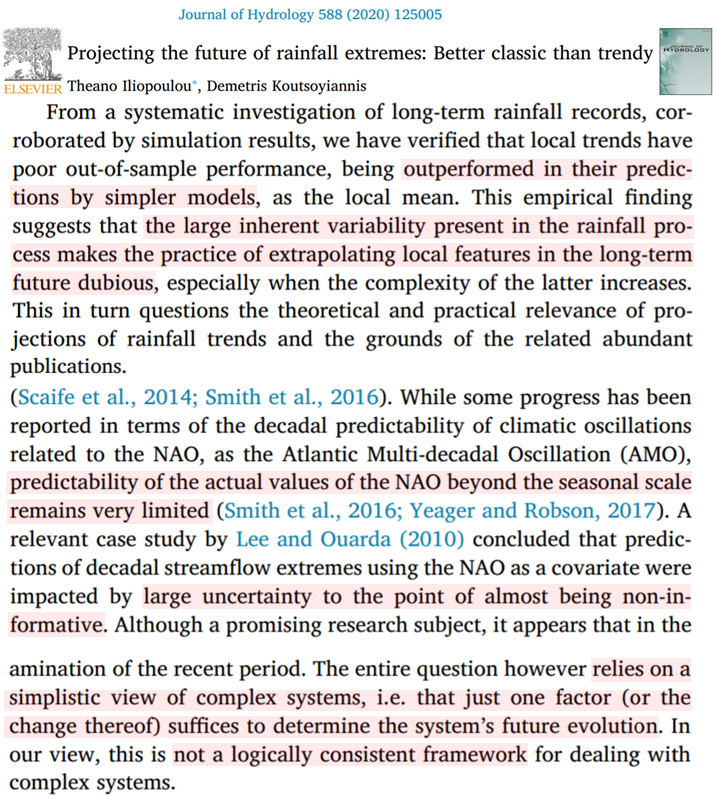 “We propose that the vapor buoyancy effect can increase Earth’s OLR and helps stabilize Earth’s climate by regulating the atmosphere’s thermal structure. Figure 1 shows the temperature and virtual temperature (buoyancy) fields in the moisture space from 2°S to 2°N using NASA AIRS data. In the free troposphere (p < 850 hPa), buoyancy is horizontally uniform because of the small Cori olis parameter and efficient gravity waves (Charney 1963; Bretherton and Smolarkiewicz 1989; Sobel et al. 2001; Yang 2018a). However, temperature increases toward dry columns due to the vapor buoyancy effect. Moving toward the dry columns, moisture and its associated vapor buoyancy are reduced. To maintain uniform buoyancy, temperature has to increase.”

“Although there is no such constraints in the boundary layer, we can assume that ∆T = 0 at the surface temperature because of the uniform sea surface temperature (SST). We, therefore, require ∆T equals ∆TW BG in the free troposphere but smoothly decays to 0 at surface: ease with climate warming due to increasing atmospheric moisture, leading to enhanced OLR over the dry area. This is a negative feedback which can help to stabilize Earth’s climate.”