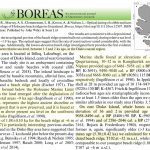 Share this…FacebookTwitterThe discovery of whale bones and marine shells at ancient beach sites 32 to 36 meters above today’s shorelines have been dated to the Early to Middle Holocene. Beach ridges were still several meters higher than today during Roman and Medieval times. The relative sea levels of the ancient past can be discerned by […]