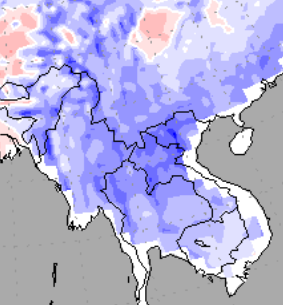 A flurry of Middle Eastern and Asian news websites are reporting on “unusual” cold sweeping across vast areas of Asia and the Middle East.

The German language thailand-tip.com reports that the “Meteorological Institute forecasts temperatures in the north to fall another 4 – 7°C by Thursday.”

The Asian Correspondent here writes that residents in North Vietnam “were treated to a rare sight Monday: snow“, writing that “the white stuff” is a “rare sight in this part of the world“.

Not only Southeast Asia is being hard hit by unusually bitter cold, but also vast areas of Central Asia, Middle East, and North Africa. Some of these regions are typically famous for agreeably warm temperatures. The charts on this page are the forecast temperature anomalies for the coming 7 days.

Asia to remain gripped by bitter cold. Forecast anomaly for the next 7 days, source: http://wxmaps.org

Extreme cold is forecast to hit much of Asia for the next 7 days at least. This should lead us to ask if less sea ice in the Arctic is causing extreme cold all the way down to the tropics, 7000 km away, months later. Over the recent years some scientists defending the global warming hypothesis have suggested that a warm Arctic is causing the rest of the northern hemisphere to see more severe winters.

Animals “literally freezing where they stand”

Desert Middle East will remain in a deep freeze for at least another week. Source: wxmaps.org.

Turkey also has been gripped by severe cold – for weeks. The rocketnews24.com reports: “Turkish cold snap literally freezes animals where they stand.”

In Syria refugee camps are struggling to stay warm. The bitter cold and rare snow have even cost the life of a rebel commander. According to Australian ABC here, “A Syrian rebel commander has frozen to death in the bitter cold brought on by a snowstorm that has swept the country this week. … the body was ‘frozen’.”

Even the tropical zone of South America is struggling to stay warm. Cooler than normal temperatures are forecast there for the next 7 days as well.

It’s strange how NASA likes to focus on one single region (Siberia), and inflates temperature data there for evidence of warming, and neglects the rest of the planet.