My last post featured a commentary by renewable energy expert Prof. Fritz Vahrenholt, who forcefully conveyed the folly of Germany’s mad rush into renewable energy, and the country’s hysterical obsession with its suicidal fast-track shutdown of its stable base-electric-power generation.

What follows are German electrical power supply charts that clearly illustrate in no uncertain terms Prof. Vahrenholt’s points. To show just how unreliable wind and sun really are, the first chart shows Germany’s power production, broken down according to the respective sources, over the last 3 and half days:

Note how there has been a virtual blackout by sun and wind since December 3 as Germany’s weather has been dismally gray and windless over the period. Such conditions are not uncommon in Europe and can persist for 2 weeks or more.

Note how there are times when sun and wind combined were less tha 2% of the needed supply. Unfortunately, power utilities simply cannot call Mother Nature up and place orders for power days in advance. They have to just take what Mother Nature sends, whether they want it or not, and German law says they have to pay for it even when they do not feed it in.

Supply havoc for no benefit

What follows next is a chart depicting Germany’s power supply from each energy source over an entire year (sorry about the suboptimal quality of the graphics). 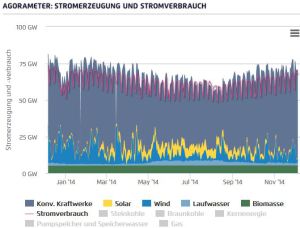 Here we see that especially in the summertime both wind and sun can make a major contribution. But once again their wildly fluctuating supply creates havoc and problems that far outweigh any “benefit” the theoretical, imperceptible 0.02 or so degrees of less warming the planet might see over the next 30 years.

And when the sun does shine and the wind blows many conventional power plants have to be throttled down to near idle, but can never be shut down because they have to be ready to fire up again as soon as the sun and wind diminish. This means these conventional power plants often run very inefficiently and highly uneconomically. So it’s little wonder E.ON is ditching the loss-making business of forced part-time power plant operation and going to renewable energies where profit is guaranteed by government mandated subsidies.

And with a power supply that is becoming exceedingly unstable and exorbitantly expensive, energy intensive industries are gearing to move operations, and the thousands of jobs they provide, out of Germany and over to foreign locations where electricity is affordable and reliable.

And does one see the pump storage (Pumpenspeicher) contribution in the above chart whenever the sun and wind go AWOL?

Of course we don’t. That’s because there is none to speak of in Germany. Yet, this is one of the main solutions that the government energy masterminds propose in order to compensate for windless and sunless periods. It still has not sunk into their heads that this amount of pump storage capacity is a technical impossibility in Germany, even with massive terra-altering. Never mind the economic unfeasibility of the idea.

The question remains: After Germany shuts down its remaining nuclear power and coal-fire plants, what will the country do when the sun doesn’t shine and the wind doesn’t blow?

That question has yet to be answered.