Just Dying To Save The Planet…Fuel-Efficient Cars Fail in Crash Tests. And: White German Christmases Not More Seldom!

Share this…FacebookTwitterTwo blurbs today, before I get ready for this evening’s New Year’s celebrations. Environmentally friendly cars as death boxes First is that people who drive small cars in order to save the climate are seriously putting themselves at risk, or even dying if involved in a serious accident. That’s the result of newly conducted crash […]

Share this…FacebookTwitterIn 2014, Germany and parts of Europe will be seeing their warmest year ever since temperature recording began in earnest late in the 19th century. The media and alarmists are giddy about this, even though most of it is due to a global weather pattern that worked to deliver an almost steady stream of […]

Share this…FacebookTwitterA couple of days ago I wrote a piece aimed at encouraging readers to consider a diet change to improve their health for the coming new year, and to ignore the consensus high-carb/lowfat diet. My own health has improved dramatically since I stopped listening to the preventive maintenance advice peddled by the boys at the […]

Share this…FacebookTwitterJoe Bastardi’s latest Weatherbell Saturday Summary is out. This week the high-profile, veteran meteorologist has some interesting comments on sea surface temperatures and this year’s once highly ballyhooed “super El Niño“. Remember how earlier this year a number a climatology experts were all giddy because somehow they had managed to convince themselves that a “super […]

Share this…FacebookTwitterAs New Year’s Day approaches here’s something off-topic, but could make a real difference to your health. It has to mine. Probably the most common New Year’s resolution one hears is “I’m going to get back in shape“. Unfortunately it is also the one that fails the most often. A year ago, at the age […] 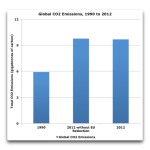 Share this…FacebookTwitterCNN recently published an online op-ed by Germany’s Federal Minister of Environment, Barbara Hendricks, titled: How Germany banishes climate myths, where she brazenly declares Germany’s Energiewende (transition to renewable energies) a success story. Nothing could be further from the truth. In reality her op-ed piece ranks right up there close to George W. Bush’s famous […]

Share this…FacebookTwitterSo far it’s been a very mild winter across Central Europe. Just days ago, with temperatures in the double-digit Celsius range, meteorologists and media wrote off the possibility of a white Christmas. Gradually all the snow being a “thing of the past” talk was starting up. Wrong again. So unpredictable can chaotic systems like weather […]

ALL MEN SHALL BECOME BROTHERS…

Ocean And Solar Cycles Show Arctic Sea Ice Will EXPAND Over The Next 3 Decades!

Share this…FacebookTwitterUpdate: Latest model run now shows less cold after New Year’s day…so fast can the weather in the future change! ================================ Much of Europe has been enjoying a mild fall, and early winter thus far as a long series of Atlantic lows laden with warm, Atlantic air masses have been sweeping regularly across the […]