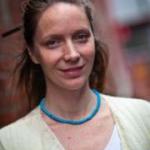 Share this… Facebook TwitterGermany’s so-called Climate Consortium here has published a telling statement on this year’s “record warm year” in Germany and the reasons behind it. The Climate Consortium represents the collective position of all Germany’s scientific climate institutes. Although the statement claims the record year “fits very well in the picture of a long-term global […]

Share this… Facebook TwitterThe online Swiss Handelszeitung (Trade News) reports on the world’s second largest reinsurer Swiss Re, and on the losses from natural catastrophes for 2014. Let’s recall that natural catastrophes are supposedly becoming more and more frequent due to the alleged man-made climate worsening from manmade CO2 emissions. Hat-tip: Kurt However the Handelszeitung […]

Share this… Facebook TwitterDirk Notz of the Hamburg-based Max-Planck-Institute: Arctic sea ice could again expand in the coming decade By Sebastian Lüning and Fritz Vahrenholt (Translated/edited by P Gosselin) Over the past 30 years Arctic sea ice has shrunk considerably. Although both in 2007 and 2012 negative records were reached, the ice recovered in the […]

Share this… Facebook TwitterRecently I published an opinion by Harvard astrophysicist Willie Soon concerning the dubious “2014 hottest year ever” claim. That post is doing very well and continues to be widely shared in the social media – so much so that the piece stung a sensitive nerve over at Climate Nexus. But instead of rebutting […]

Share this… Facebook TwitterRainer Hoffmann of the German language Klimamanifest has produced a short clip on the 2°C target we keep hearing about. According to activists the globe mustn’t be allowed to warm up more than 2°C over its 1900 level, otherwise it will tip into an irreversible and unstoppable spiral to climate catastrophe that […] 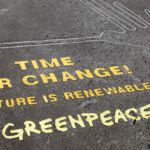 Share this… Facebook TwitterIt’s clear: none of the intended aims were reached during the two-week UN mega climate conference in Lima. Some baby steps were made. And of course they are being sold to the public as important progress on the road to a binding treaty in Paris next year. No one believes it. What was […]

Share this… Facebook TwitterThe Lima Climate Conference has been extended another day as countries are still unable to reach an agreement on how much to cut emissions and who has to pay how much. But there are mounting signs that the talks may have fallen apart. This morning NTV German public television writes that German Environment […]

Share this… Facebook Twitter Harvard Astrophycist Willie Soon asks if hottest year ever claim is “a joke”. NoTricksZone sought out astrophysicist Dr. Willie Soon’s opinion on the claim that 2014 is the “hottest on record”. What follows is his reply: 2014 hottest year a manipulation Is this a joke or simply my BAD dream? Prostituting science […] 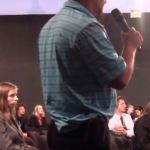 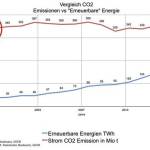 Share this… Facebook TwitterReader Kurt in Switzerland points out that Germany’s Climate Pope John Schellnhuber, Director of the end-of-times Potsdam Institute for Climate Impact Research (PIK), has just postponed the timepoint when man’s CO2 emissions must reach a peak and start their (rapid) downward trend. Two days ago I quoted Professor Schellnhuber, who said: At the […] 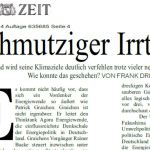 Share this… Facebook TwitterGerman national weekly DIE ZEIT writes in its latest hard copy edition that one of Europe’s leading green energy thinkers now concedes Germany’s much ballyhooed Energiewende (transition to renewable energies) has been a “filthy blunder”. Page 4 of December 4, 2014, edition of DIE ZEIT. “Filthy Blunder” When the green movement itself makes […]