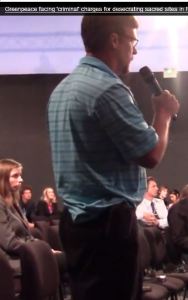 Many outlets are reporting on Greenpeace’s desecration and exploitation of ancient Incan and Nazca historical sites for political and fund-raising purposes. See here.

Today the online Spiegel covers (instead of buries) the story: “Nazca Lines in Peru: Greenpeace apologizes for cultural contamination“.

That apology of course comes only after a huge wave of negative publicity. When asked by C-Fact’s Craig Rucker at a press conference about what the activists had done, a Greenpeace spokesman seemed completely indifferent about having used the site for their stunt, and even thought that everyone just loved Greenpeace.

Indeed here it appears that the Greenpeace higher-ups were actually there at the site and aware of what the activists were doing. It seems as if the stunt even may have been orchestrated by the higher-ups. Will Greenpeace officials take responsibility for the actions of their activists members? Spiegel writes:

“On their homepage Greenpeace showed themselves as demonstratively proud about the stunt even still on Thursday morning. […]

However in the meantime Greenpeace no longer considers the spectacular action as a good idea.”

Note how Greenpeace officials quickly backpedalled once the massive backlash became undeniable. Greenpeace higher officials are (suddenly) acting as if they had nothing to do with it, and that it had been carried out solely by the activists on their own.

It’s a pity that Greenpeace officials always distance themselves from the actions of their activists whenever they go awry, but are always quick to collect the cash donations that flow in afterwards when the actions succeed. Spiegel adds:

Also the head of the Greenpeace delegation at the climate conference, Martin Kaiser, said he expects that the activists to always take the responsibility for their actions.”

Unbelievable. What about Greenpeace officials taking responsibility for once?

Greenpeace chief Kumi Naidoo will personally fly into Lima by jet and apologize. But that may be too little, too late. Spiegel writes:

Peru’s Deputy Cultural Minister Luis Jaime Castillo is requesting the state attorney to file charges for ‘the attack on archeological monuments’, a crime that is punishable by as much as six years in prison.”

Of course European governments and other organizations will express disgust at the activists’ action for awhile, but behind the scenes they’ll be working out a deal with the Peruvian government to get them off…probably in exchange for cash and support.