Reader Kurt in Switzerland points out that Germany’s Climate Pope John Schellnhuber, Director of the end-of-times Potsdam Institute for Climate Impact Research (PIK), has just postponed the timepoint when man’s CO2 emissions must reach a peak and start their (rapid) downward trend.

Two days ago I quoted Professor Schellnhuber, who said:

At the latest by 2030 Co2 emissions must reach their peak and start downward.”

That deadline appeared to be new, so Kurt in Switzerland checked if that was the deadline Schellnhuber had given in the past. Kurt writes:

The global emissions trend reversal must occur no later than 2020 [in order to assure compliance to the 2-degree C limit].”

Three years ago Schellnhuber was warning we had to turn things around by 2020 at the latest, or else we would be doomed. Now suddenly we’ve just been given 10 more years?

Now what could have possibly compelled Prof. Schellnhuber to recalculate a new peak time? Perhaps it was the sudden the realization that his expectation of a possible trend change by 2020 was one of Lucy in the Sky with Diamonds? Global CO2 emissions have not even yet started to slow down, and a trend reversal point is nowhere near in sight. Major emerging industrial countries like China and India are still seeing rapid, accelerating CO2 emissions growth.

Even Schellnhuber’s home country of Germany, supposedly a model for cutting CO2 emissions, has not managed to reduce CO2 emissions since 2000 – despite more than tripling its renewable energy capacity at a cost of hundreds of billions of euros, as EIKE shows here today: 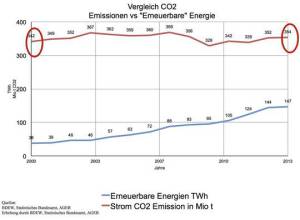 CO2 emissions from electricity are depicted by the red line. Renewable energy capacity by the blue line. It’s not working! Source: BDEW

According to an evaluation by participants of the UN Climate Conference in Lima Peru, Austria has not ‘saved a single gram of CO2.’ […]

In 1990 Austria saw CO2 emissions of 78 million tonnes; in 2005 it was 82 million tonnes. ‘When one calculates the EU2020 taregts, Austria will end up once again at only 78 million tonnes in the year 2020 – and that only if additional measures get implemented,’ Brunner criticizes.”

We can certainly expect Professor Schellnhuber to make yet another recalculation in the year 2018 or so, pushing back yet again the deadline for a trend change to 2040 or even 2050. This of course is as remote from science as one could possibly get. Professor Schellnhuber and his scientists in Potsdam are rapidly making themselves to a laughing stock.