Hans-Joachim Schellnhuber and his WBGU have just released their latest Special Report: Climate Protection as a World Citizen Movement. The 126-page report is the 9th of its kind since the first one was published in 1995. 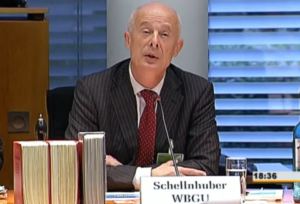 Professor Schellnhuber telling German Parliamentarians to act as he and his WBGU recommend, or else sea levels will rise 230 feet. Photo cropped from bundestag.de.

The latest Special Report is shrill and the underlying message is: Time is running out and unless policymakers do as us German scientists say, the world will end in catastrophe. The Special Report suggests that the normal democratic processes are failing and that governments must start heeding the instructions of the elite German group of Potsdam scientists. Schellnhuber, a person who openly admits having no background in sociology, insists that he and his fellow WBGU scientists be given the helm in all decision matters concerning climate policy.

Schellnhuber, the WBGU Chairman and Director of the alarmist Potsdam Institute for Climate Impact Research (PIK), once recommended a watering down of democracy and more policy-making power being placed in the hands of far-sighted “experts”.

The alarmist, climate doomsday obsessed site Klimaretter here writes that Hans Joachim Schellnhuber not long ago appeared before German Parliamentarians to present the “impending climate catastrophe” up close and “to explain the four recommendations of the Council”.

First the expertise of climate science must be securely anchored in the political process of climate action. Also when, as Schellnhuber emphasizes, policy making and science are of two different realms, science is essential for keeping the world climate policy on course: ‘Without a compass, you cannot steer a ship.'”

Here we see Schellnhuber & Co. are not content with simply supplying governments with data, but they also insist on being the ones guiding future policy for global society. But how can we know that their science is not being tainted by their political convictions? We can’t. This is why it is so dangerous to put so much into the hands of such a tiny group…who happen to be the most alarmist at that.

Secondly there should be the right for countries to file climate protection lawsuits in constitutional courts in order to increase the societal pressure on the governments. A strong involvement by the civil society is decisive in pushing climate protection forward. The ‘global societal contract for climate protection’ does not only manifest itself in demonstrations such as the recent one in New York, but also in the strengthening of the Divestment Movement.

Not only do the WBGU scientists want to be the ones running planetary policymaking, but they want it institutionalized.

Thirdly the two-degrees Celsius target has to be established as international law because only by limiting global warming to two degrees Celsius can the consequences for the societies in many countries be managed. A continued business-as-usual CO2 emission would not only lead to a melting of the Greenland and Antarctic ice sheets, but also of the East Antarctic. That would bring about a sea level rise of 70 meters.”

Here the scientists, who to many readers, by now are surely beginning to appear as the quintessential mad scientists, are claiming that sea levels will rise and drown large parts of the planet if their requests do not become binding international law. Hard to be believe they’ve made it this far.

Schellnhuber warns that time is running out and is calling for “flat zero” global carbon emissions already by the year 2070 in order to reach the 2°C target. “At the latest by 2030 Co2 emissions must reach their peak and start downward.”

That demand, and their seemingly complete unawareness of the 18-year pause and growing scientific literature showing only moderate CO2 sensitivity, suggests that the WBGU are very remote from reality.

Since the WBGU was established in the early 1990s, they’ve published 9 lengthy special reports and 14 even lengthier flagship reports…all pushing for radical societal transformation. Seems the Potsdam scientists are more preoccupied with being the architects of social adventurism than serious scientists objectively looking at the recent data and findings.

26 responses to “Teutonic Power Grab…Schellnhuber & Co. Tell World To Do As They Say, Or Globe Gets 230-Foot Sea Level Rise!”