German politicians see themselves as the saviors of our climate. In the early 1990s German politicians started the policies that ultimately culminated in the “Energiewende”, which aims to eliminate nuclear power generation and some 76% of the fossil fuel power generation. By 2050 some 80% of power generation should come from “renewable” green sources such as wind, solar, biomass, waste incineration and hydro. Since the volatile sources of wind and solar power will have to contribute the lion’s share, politicians reluctantly concede 20% of the energy coming from reliable fossil power sources.

Germany’s endeavor is indeed breathtaking. A look at Figure 1 shows in detail how massively Germany had once relied upon fossil and nuclear power sources to secure a highly reliable power supply. These sources were controllable and highly reliable. And because Germany’s topology offers only limited possibilities for hydropower, that renewable source is minimal. 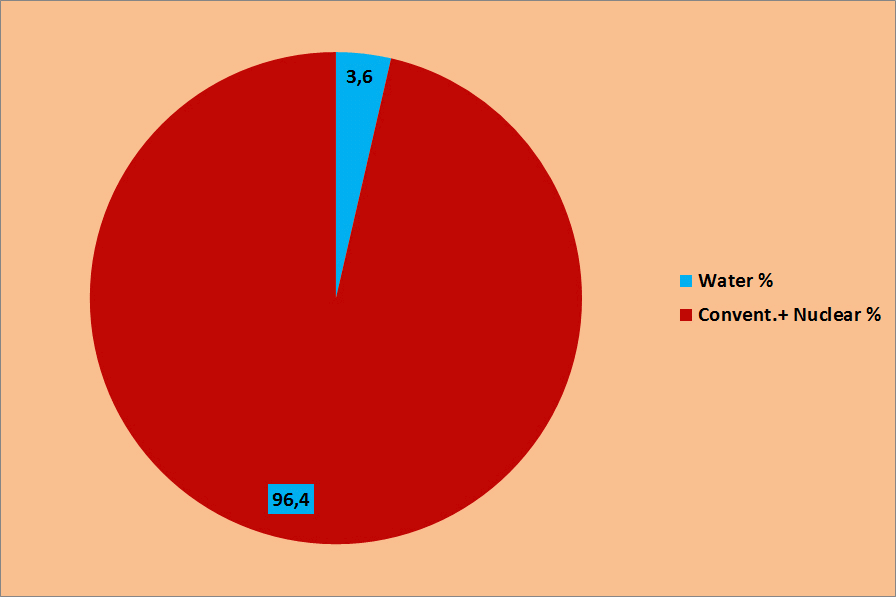 Figure 1: In 1990 the German grid was able to count on conventional power sources which were controllable and highly reliable. Renewable hydropower accounted for only 3.6 %

Today, after some two decades of massive green energy policy, the situation has changed dramatically. Wind, solar, biomass and waste incineration plants have been promoted to such an extent that together with hydropower, the share of “green energy” today has reached 25.8 % of the country’s total electric power production. This resulted from Germany’s EEG renewable energy feed-in act which guarantees producers fixed rates for 20 years and forces power companies to buy up all the renewable power produced, regardless of the market conditions. The result has been a massive oversupply which has led to steep price drops on power trading floors, which in turn have pushed fossil fuel utilities to and beyond their profitability limits. Surplus production has been repeatedly dumped onto neighboring markets and resulted in massive disturbances for the respective national power grids. Readers interested in a more detailed description of the policy might have a look at the article of Marita Noon [NOON].

The problem with the “renewable” power sources of wind and solar is their intrinsic volatility coupled with their poor capacity utilization rates of only 17.4% for wind and 8.3% for solar (average values for Germany).

That poor utilization rate means one has to build up huge overcapacities in order to achieve a certain amount of power production. Worse, the power source fluctuates wildly according to weather conditions. As a consequence, Germany has to maintain a dual power generation infrastructure that comprises a grossly overinflated capacity of “renewable” wind and solar power plants shadowed by a full scale backup set of conventional plants. These conventional power sources must always be on standby, ready to take over when weather conditions aren’t favorable. The production-fluctuation range of the “renewables” wind and solar is incredibly wide and volatile. For example in Germany there is an installed nameplate capacity of nearly 73,000 MW. Yet the minimum power output in Germany in 2014 from both sources was a meager 29 MW (only 0.04% of installed capacity) while the maximum value was 38,000 MW (48%).

The massive buildup in wind and solar power has already resulted in a considerable nominal overcapacity of “renewable” power sources.

The combined rated capacity of all “renewable” power sources already reaches about 87,000 MW, which is the maximum power consumption the grid has been designed to secure. Additionally, a minimum conventional power station capacity of some 28,000 MW has to be constantly connected to the grid in order to secure supply stability. As a result the risk of the grid reaching an oversupply situation if weather conditions are favorable for both wind and solar power plants is growing with every additional “renewable” plant that comes online. Currently 5,000 – 6,000 MW are getting added each year. That situation is aggravated by the fact that there exists no technology to absorb and store any noticeable quantities of oversupply. Neighboring countries are already taking measures to fend off surplus-power-dumping that could destabilize their grids.

The result is a grid which at times is so oversupplied with power that something will have to give. Fossil fuel power plants have been throttled to the point where they are no longer profitable and many power companies have started mothballing them, so quickly in fact that Germany had to pass legislation forcing producers to keep their fossil plants on stand-by, and to do so even if they lost money. Even the reliable “classic” renewable power sources – e.g. hydropower – are starting to suffer because most are not supported by government schemes.

As the build-up in renewable capacity continues, even the subsidized “renewable” power sources will sooner rather than later be forced into fierce competition for access to the grid whenever the weather conditions turn favorable. One can speculate that within just a couple of years, the first “renewable” energy sources will slowly be driven out of the market because of oversupply. Eventually the renewable power producers will be forced to cannibalize each other in an increasingly fierce competition for privileged access to the power grid as the unwanted events of over-supply become increasingly more frequent.

Things are set to get much worse

Normally, one would think that a government confronted with such a situation would stop at this point and wait for a technically and commercially viable solution for storing the increasing amounts of produced surplus electric energy – for use during times when weather conditions are less favorable. Unfortunately no such storage solution is currently available at the required scale, and anything being proposed so far is either much too expensive or has efficiency factors that are not worth discussing.

Yet Germany has a unique peculiarity: its leaders sometimes exhibit a stunning inability to recognize when the time has come to abandon a lost cause. So far €500 billion has already been invested in the “Energiewende”, which is clearly emerging as a failure. Yet all political parties continue to throw their full weight behind the policy rather than admitting it is a failure (which would be tantamount to political suicide). Instead, the current government coalition has even decided to shift into an even higher gear on the path to achieving its objective of generating 80% of German electric power from “renewable” sources by 2050. If the situation is practically unmanageable now with 25% renewable energy, it’ll be an uncontrollable disaster when (if) it reaches 80%.

If the government sticks to its targets, the share of the different power sources will probably appear as in Figure 2. Currently just 26% has been achieved so far, and the existing biomass share of some 7% is more or less doomed and thus will also have to be replaced by wind and solar. One can easily see how daunting the task that still lies ahead really is. 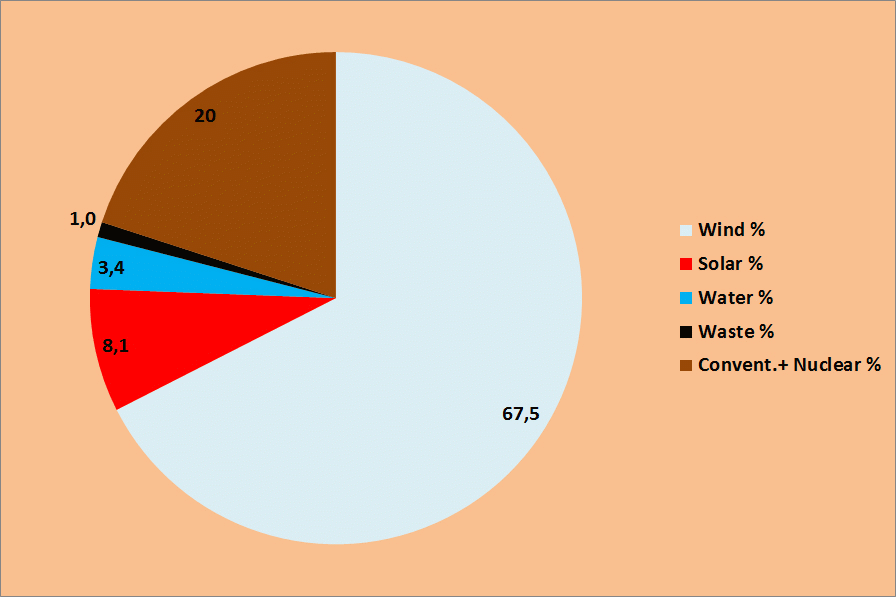 Figure 2. The official goal of achieving 80% power supply from “renewable” sources by 2050 requires further massive investments in wind and solar power technologies. Imagine the huge power supply fluctuations one can expect to see from wind and sun.

Waiting for the grand finale

The real risks that lie ahead for the German power generating infrastructure become more recognizable if one looks at the nameplate capacity buildup that has taken place, e.g. just over the past five years, and compares it to what will additionally be needed by 2050, see Figure 2. Keeping in mind that €500 billion have already been contracted and will have to be paid by the consumer, one gets an idea of the proportions of the task still to be tackled in the coming years. 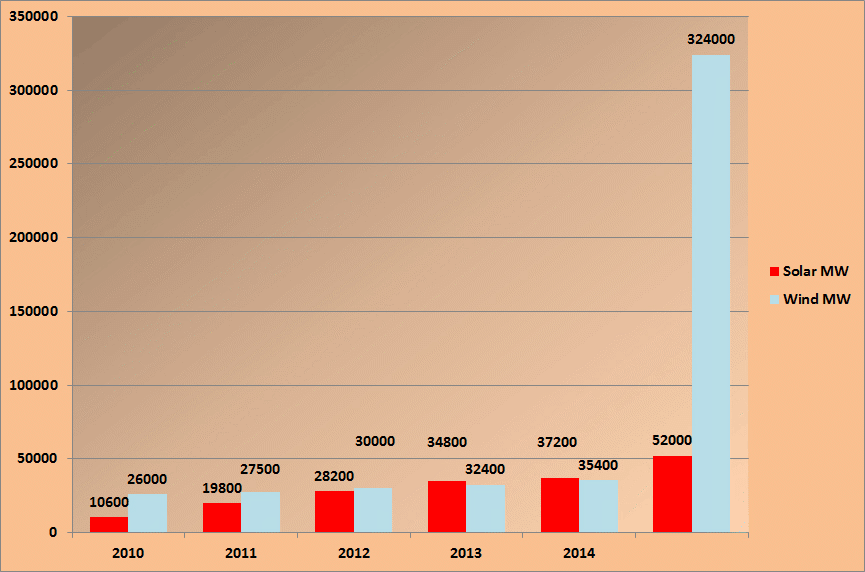 Figure 3. The installed nameplate power production capacities for wind, solar and biomass as of 2014 has already severely burdened the German consumer with costs of about €500 billion. That will dwarfed by what lies ahead, if politicians don’t change course. Note how 376,000 MW of wind and sun capacity may be installed to ensure meeting the country’s roughly 70,000 MW of demand.

In the fight to get power into an often times severely overloaded grid, that’s when cannibalism amongst “renewable” power sources will really become intense. Will wind farmers sabotage solar plantations? Will solar owners sabotage wind turbines? Time will tell, maybe much sooner than we think.