The Warmunists are fond of stating that the warming in the late twentieth century was unusual and unprecedented, and could only have been caused by rising CO2. They refuse to recognize that the early twentieth century warming was just as rapid. Of course that statement is also based on the lack of data for earlier times.

But there ARE data for earlier times. The Central England Temperature (CET) data set extends all the way back to 1659 and has been maintained to this day. Here is a window into an early 90-year section of that data set, overlaid with the last 90 years. 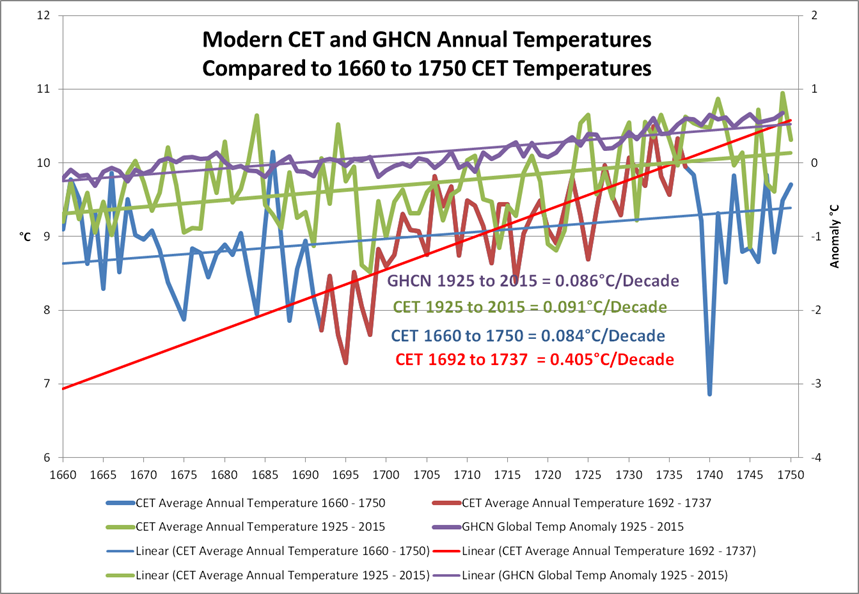 If the trends for all three 90-year data sets are compared, they are nearly identical, from 0.084 to 0.091°C per decade warming.

But the 45-year span from 1692 to 1737 was warming at nearly five times that rate, 0.4°C per decade. This warming rate is more than twice as fast as the late twentieth century rate, for twice as long.

Central England warmed by two degrees, three degrees if one measures from the coldest year to the warmest in that interval. For comparison, here is the GHCN data for the modern period. 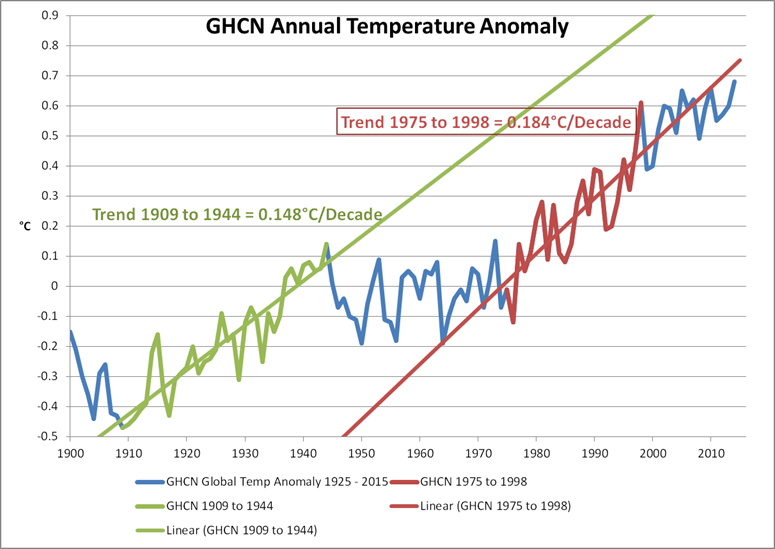 Please note that I have picked the time period with the most warming in that interval, including from the bottom of the 1976 La Niña to the top of the 1998 El Niño. The early twentieth century warming began with the 1914-15 El Niño. If the El Niño and La Niña events are removed, both warming periods have a trend of about 0.16°C per decade. The 0.4°C/decade warming period from 1692 to 1737 must have been very scary for the eighteenth century climatologists.

It all came to an abrupt end, however, in 1739 and 1740. The temperature dropped three degrees practically overnight in climate terms. See figure 1. What caused that? A volcano!

On the southern end of Hokkaido, in Japan, there is a large caldera called Shikotsu. It is now filled with a lake. This caldera was formed about 35,000 years ago. On the edge of the caldera three volcanic vents have been intermittently active since then. One of those, Tarumai, (or Tarumae) is active to this day, including four VE5, very large eruptions in 6950 BCE, 800 BCE, 1667, and 1739. Though both the 1667 and 1739 eruptions were classed as VE5, the 1739 event pushed enough gas into the stratosphere to affect global climate.

Sheveluch, on Kamchatka, is also implicated, but that eruption was only a VE3.

The resulting cold caused the “Great Irish Frost” of 1740, where Irish harbors and rivers froze over, preventing import of grain, frost killed the potato crop, and 20 to 30% of the Irish population died of cold and famine. The cold affected all of northern Europe, but was a disaster for Ireland due to the politics of the time. For a scholarly treatise on it see The Irish famine of 1740–1741: famine vulnerability and “climate migration”, here. The implication is that the good years prior to 1740, made Ireland in particular, vulnerable to a cold snap. This is the thing to be feared in our future rather than continued warming.