This post is one for the wind-energy-clingers, who refuse to admit how bad it really is.

A new German paper assesses wind energy in Europe . The results are devastating. It concludes that wind energy requires almost 100% backup and that the more capacity that gets installed, the greater the volatility.

The paper appearing at the VGB, authored by Thomas Linnemann and Guido Vallana, finds that “the total wind fleet output of 18 European countries extending over several thousand kilometers in north-south and east-west direction is highly volatile and exhibits a strong intermittent character.”

In other words the power supply across the European grid fluctuates wildly and thus cannot work well. The paper’s abstract continues:

An intuitively expectable smoothing of this wind fleet output to an amount, which allows a reduction of backup wind power capacity, however, does not occur. In contract a highly intermittent wind fleet power output showing significant peaks and minima is observed not only for a single country, but also for the whole of the 18 European countries. Wind energy therefore requires practically 100% back-up. As the (also combined) capacities of all known storage technologies are (and increasingly will be) insignificant compared to the required demand, backup must be provided by conventional power plants, with their business cases fundamentally being impaired in the absence of capacity markets.”

The paper then provides a solid analysis, and charts showing why this is the case. Below their Figure 1 illustrates the extreme volatility of onshore and offshore German wind energy over the year 2016: 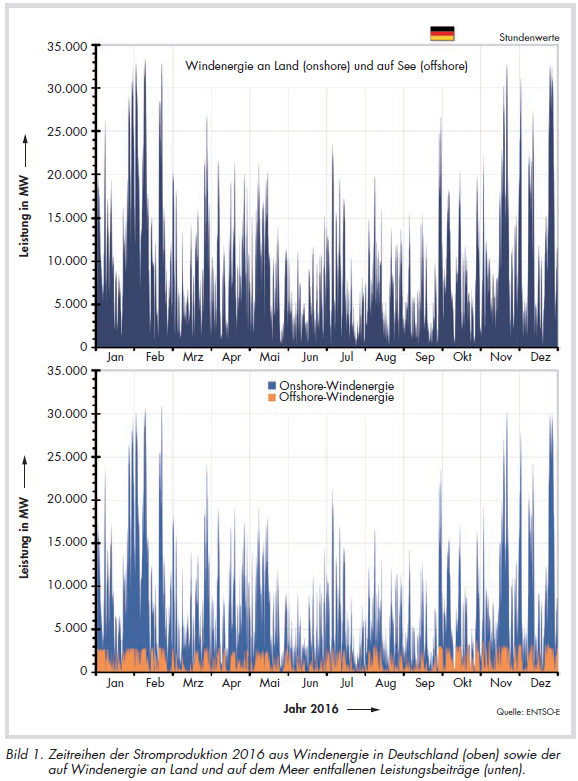 Germany’s wind parks have produced only a fraction of their rated installed capacity, rarely ever reaching 20% annually with an average of 17% since 1990: 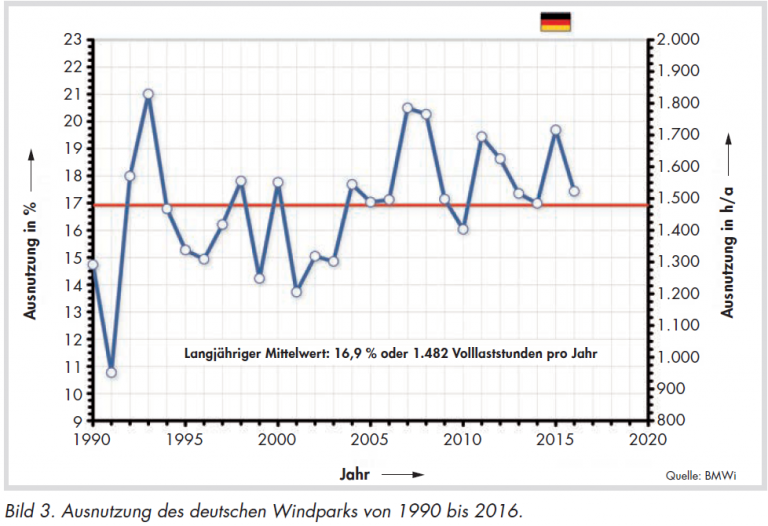 The capacity utilization of German Windparks from 1990 to 2016. Source: BMWi

The available (secured) permanent electrical output of the German wind parks thus remains always below 1% of the installed rated capacity, or expressed in other words: Every year there was at least a quarter hour in which 99% of the rated capacity of the German wind parks was not available and where practically 100% of plannable backup energy dominated.”

Moreover an anylsis of weak wind phases over the 2010 to 2016 period shows that “there were at least 160 phases 5 days long or more where the output from German wind parks fell below 5000 megawatts and a 10-14 day phase of weak wind days occurred every year.