In the scientific literature, wind energy’s effects on human populations has increasingly garnered an ignominious reputation in recent years.  For example, wind energy is claimed to (1) lead to “genocide” and “green grabbing”, (2) harm human health and well-being, and (3) lower home property values. 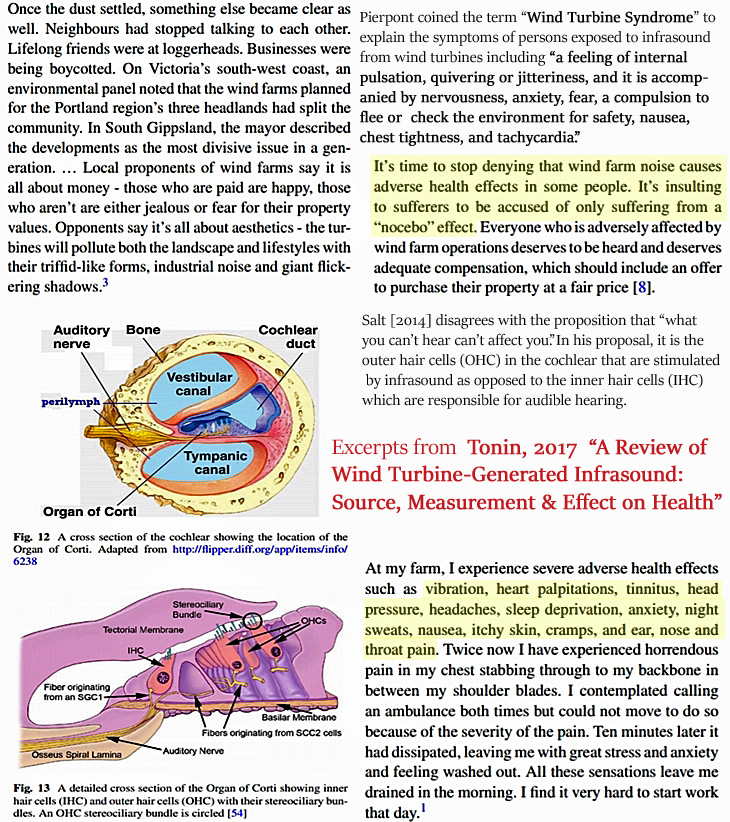 “The ‘solution’ is now the ‘problem:’ wind energy, colonisation and the ‘genocide-ecocide nexus’ … The green economy emerges in the shadow of conventional fossil fuel production, presenting itself as a ‘solution’ and pathway to slow the effects of ecological, climate and economic crisis. Said differently, renewable energy in particular, and the green economy in general, emerge as the ‘lesser evil’ of industrial development. Discussing the principle of ‘lesser evil’, Eyal Weizman writes, ‘less brutal measures are also those that may be more easily naturalised, accepted and tolerated – and hence more frequently used, with the result that a greater evil may be reached cumulatively’. The green economy is the lesser industrial evil, utilising a technique of war to morally buffer and continue the proliferation of industrial waste in the name of climate change mitigation, which according to this research results in greater cumulative social and environmental alterations and, even, the systemic and increasing destruction of alternative value systems and ways of life valuing their relationships with their ecosystems. … State-sanctioned land grabbing by corporations in the name of sustainable development is accumulation by dispossession by environmental ethic – green grabbing [Fairhead et al., 2012] – which walks a fine line with genocide. ‘The Rana’, exclaims: ‘We hold responsible all of the political parties of Mexico, the government in its different levels for the attempt to annihilate us, the attempt to grab our land and to wipe us off the map.’”  (Dunlap, 2018b)

“Sustainable development and climate change mitigation policies, Dunlap and Fairhead argue, have instigated and renewed old conflicts over land and natural resources, deploying military techniques of counterinsurgency to achieve land control. Wind energy development, a popular tool of climate change mitigation policies, has consequently generated conflict in the Isthmus of Tehuantepec (Istmo) region in Oaxaca, Mexico. Research is based on participant observation and 20 recorded interviews investigating the Fuerza y Energía Bíi Hioxo Wind Farm on the outskirts of Juchitán de Zaragoza. This paper details the repressive techniques employed by state, private and informal authorities against popular opposition to the construction of the Bíi Hioxo wind park on communal land. Providing background on Juchitán, social property and counterinsurgency in Southern Mexico, this paper analyzes the development of the Bíi Hioxo wind park. It further explores the emergence of ‘hard’ and ‘soft’ counterinsurgency techniques used to pacify resistance against the wind park, enabling its completion next to the Lagoon Superior in October 2014. Discussing the ‘greening of counterinsurgency’, this contribution concludes that the Bíi Hioxo wind park has spawned social divisions and violent conflict, and intervened in the sensitive cultural fabric of Istmeño life.”  (Dunlap, 2018a)

“An aggregate annoyance construct has been developed to account for annoyance that ranges from not at all annoyed to extremely annoyed, toward multiple wind turbine features. … Household complaints about wind turbine noise had the highest average aggregate annoyance (8.02), compared to an average of 1.39 among those who did not complain. … It should also be underscored that in response to concerns raised during the external peer review of this paper, the association between the non-noise annoyance variables and self-reported and measured health outcomes was evaluated. With the exception of vibration annoyance, which could not be evaluated due to the small sample size, blinking lights, shadow flicker, and visual annoyance were found to be statistically associated with several measures of health, including, but not limited to, migraines, dizziness, tinnitus, chronic pain, sleep disturbance, perceived stress, quality of life measures, lodging a WTN-related complaint, and measured diastolic blood pressure.”  (Michaud et al., 2018)

“The findings indicate that residential proximity to wind turbines is correlated with annoyance and health-related quality of life measures. These associations differ in some respects from associations with noise measurements. Results can be used to support discussions between communities and wind-turbine developers regarding potential health effects of wind turbines.”  (Barry et al., 2018)

“The aim of this study was to evaluate the perception and annoyance of noise from wind turbines in populated areas of Poland. … It was estimated that at the distance of 1000 m the wind turbine noise might be perceived as highly annoying outdoors by 43% and 2% of people with negative and positive attitude towards wind turbines, respectively. There was no significant association between noise level (or distance) and various health and well-being aspects. However, all variables measuring health and well-being aspects, including stress symptoms, were positively associated with annoyance related to wind turbine noise.”  (Pawlaczyk-Łuszczyńska et al., 2018)

“In 2015, the Australian Senate Select Committee on Wind Turbines concluded there was credible evidence from a number of people who reside in proximity to wind turbines who have complained of a range of adverse health impacts. These include tinnitus, raised blood pressure, heart palpitations, tachycardia, stress, anxiety, vertigo, dizziness, nausea, blurred vision, fatigue, cognitive dysfunction, headaches, ear pressure, exacerbated migraine disorders, motion sensitivity, inner ear damage and sleep deprivation.  A historical review shows that whilst initially the audible sounds of wind turbines disturbed people in their sleep, more complex prognoses such as Vibroacoustic Disease and Wind Turbine Syndrome were proposed to explain the reported health symptoms. These diseases were hypothesised to be linked to the emission of infrasound from wind turbines, particularly tonal infrasound at the blade pass frequency of the turbine blades and associated harmonics.”

“Salt [2014] disagrees with the proposition that “what you can’t hear can’t affect you”. In his proposal, it is the outer hair cells (OHC) in the cochlear that are stimulated by infrasound as opposed to the inner hair cells (IHC) which are responsible for audible hearing. Figure 12 is a cross section through the cochlear in the inner ear and the location of the Organ of Corti containing the OHC and the IHC. Figure 13 is a more detailed view of the Organ of Corti.  According to Salt, the ear responds to infrasound through the OHC and whilst the sensation is not “heard”, there is nevertheless a stimulation of the cochlea. The question is whether the stimulation by infrasound remains confined to the ear and has no other influence on the person or whether there are on-flowing effects which would explain the symptoms allegedly attributable to wind turbine infrasound.”

“Pierpont coined the term “Wind Turbine Syndrome” to explain the symptoms of persons exposed to infrasound from wind turbines including “a feeling of internal pulsation, quivering or jitteriness, and it is accompanied by nervousness, anxiety, fear, a compulsion to flee or check the environment for safety, nausea, chest tightness, and tachycardia”. According to Van den Berg [56], these symptoms are well known when persons are put under stress and thus might not be specific to the impact of wind turbines. People with a generalised anxiety disorder also have symptoms which include trembling, restlessness or a feeling of being “edgy”, excessive worry and tension, an unrealistic view of problems, nausea and muscle tension and these conditions might become worse during periods of stress.”  (Tonin, 2017)

• Infrasound, vibrations disturb the comfort of nearby residents

“Infrasound, low frequency noise and soil vibrations produced by large wind turbines might disturb the comfort of nearby structures and residents. In addition repowering close to urban areas produces some fears to the nearby residents that the level of disturbance may increase. Due to wind loading, the foundation of a wind turbine interacts with the soil and creates micro-seismic surface waves that propagate for long distances and they are able to influence adversely sensitive measurements conducted by laboratories located far from the excitation point.”  (Gortsas et al., 2017)

“We show that the construction of wind turbines close to households exerts significant negative external effects on residential well-being … In fact, beyond unpleasant noise emissions (Bakker et al., 2012; McCunney et al., 2014) and impacts on wildlife (Pearce-Higgins et al., 2012; Schuster et al., 2015), most importantly, wind turbines have been found to have negative impacts on landscape aesthetics (Devine-Wright, 2005; Jobert et al., 2007; Wolsink, 2007). … We show that the construction of a wind turbine within a radius of 4,000 metres has a significant negative and sizeable effect on life satisfaction. For larger radii, no negative externalities can be detected. “  (Krekel and Zerrahn, 2017)

“We present the results of a large-scale analysis on how on-shore and off-shore wind turbines affect the property prices of nearby single family residential and vacation homes in Denmark. We find that on-shore wind turbines negatively affect the price of surrounding properties to a distance of three kilometers. The negative impact increases with the number of wind turbines at a declining marginal rate but declines with distance. In the case of off-shore wind turbine farms, we do not find a significant effect of having an off-shore wind farm in view from a property itself or from the nearest beach, likely because the closest off-shore turbine is 9 km from the closest traded home. … The results suggest that ceteris paribus, wind turbine farms should be built quite far away from residential areas with turbines gathered in larger wind farms rather than installed as single turbines.”  (Jensen et al., 2018)