Share this…FacebookTwitterThe cold now sweeping over Europe and other parts of the globe are due to natural cycles, says German meteorologist Thomas Globig. He points out that the first 2 weeks of December in Britain have been the coldest since the last little ice age 350 years ago, and claims some climate models have criminally under-estimated solar influence […]

Silence Of The Greens

Share this…FacebookTwitterGermany’s Greens grow silent when confronted with questions on democracy, tolerance and free speech. The German Greens think it is their duty to conduct inquisitions whenever anyone challenges prevailing environmental dogma. But whenever they themselves are asked tough questions on democracy and freedom of expression, they go silent and run for cover. When the questions get tough, […] 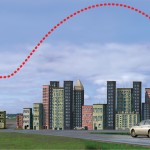 Urban Heat Island Effect Can Be Up To 9°C , Says NASA

Share this…FacebookTwitterWe know that more and more temperature stations have been sited in urban areas over the last few decades, and surely this has had an impact on the measurement of the globe’s temperature. But not to worry, say scientists, the raw data have been homogenized in order to compensate for this. Have they compensated […]