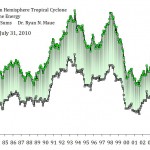 Share this…FacebookTwitterHow about just appeasing the gods with human sacrifices? That could work too.I just heard an interview on German NDR Info public radio with Mojib Latif, of the Max Planck Institute for Meteorology. Of course he was brought on to say that the “monster” Yasi “killer” cyclone hitting Australia and the “mega-blizzard” pounding the US and […]

Stefan Rahmstorf: Greenland Could Melt With Another 0.4°C Of Warming

Share this…FacebookTwitterThe 5th Arctic Frontiers Conference in Tromsø, Norway recently took place with about 1000 scientists attending from all over the world (another big footprint). But except for a few fringe media outlets, no one listened. So I thought I’d lend these poor desperate alarmist scientists a favour and help them get their message out. This […]