How about just appeasing the gods with human sacrifices? That could work too.I just heard an interview on German NDR Info public radio with Mojib Latif, of the Max Planck Institute for Meteorology. Of course he was brought on to say that the “monster” Yasi “killer” cyclone hitting Australia and the “mega-blizzard” pounding the US and Canada are due to global warming.

The adjectives I use here are what the media today are using. Normally I just let this rubbish go, but he made a couple of points I feel are worth discussing and are indicative of the sad state to which the climate science field has devolved today.

The radio moderator asked him what’s behind these weather extremes? To me, Latif’s answer makes no sense. Maybe much of the audience is not familiar ENSO’s and so maybe that’s why Latif and the media keep getting away with it every time. His answer in a nutshell:

The mega storms can be traced back to the current La Nina, which is a cold surface temperature phenomena in the equatorial Pacific region. But behind that, is global warming.

That’s what he claimed. The weather extremes are caused by cool Pacific waters, which are consistent with global warming. He also reiterated the theory that global warming leads to more extreme storms, even though there is no data to support this. Call it the missing storms. They’re somewhere, and that they can’t be found is a travesty.

Actually, those who are not ignorant in the field know that the opposite is occuring – there are fewer storms today. What’s drastically higher is the media strom hype. 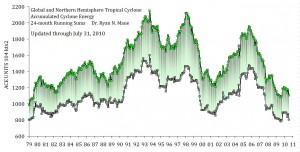 Accumulated Cyclone Energy is near a 30-year low. Where are the missing storms?

The second point I found amazing is Latif’s recommendation when asked if adaptation to climate change would work as a way to cope with extreme weather events. I haven’t yet found an audio link to the radio interview, so I’ll provide what he said in a nutshell:

Adaptation in the end will not work. It will be necessary for man to limit the earth’s temperature rise.”

And how does man regulate Mother Nature? By reducing CO2 emissions of course. That’s the rain dance that will appease the weather gods and make the big storms go away.

Hard to believe this guy is a scientist.