Tabloid Climatology From A Tabloid Meteorologist

Germany’s leading tabloid has a report today called: Expert: More and More Extreme Weather In Germany. What is this claim based on?

It’s based on short-term observations made by official Bild tabloid meteorologist Dominik Jung, who is quoted as saying:

Just take a look at the monthly deviations in average temperature in Germany from 2010. There you’ll notice an almost symmetrical up and down. Every positive extreme has a corresponding negative.”

One year of data says this will be the case for the future, with extremes even growing wider? So claims the Bild weatherman. Strangely, Bild refers to Jung as “Der Klima-Experte” (the climate expert). I thought meteorologists and climatologists were completely different. Obviously, when one makes extreme forecasts of disaster, then it qualifies a person as a “climate expert”.What data does Jung use to draw his extreme weather conclusion?

Numerous weather exremes resulted from the temperature anomalies last year, such as the coldest May since weather records are kept, and the long lasting heat wave of June-July, or multiple high water in East Germany.”

In summary, Jung bases his climate projection on 3 events that occurred in one single year. And my recollection is that the “long lasting heat wave of June-July” was a whole three weeks long, starting at the end of June and extending to about July 22, and was interrupted at least twice by cooler weather. What the heck – good enough to count as an extreme.

Jung then admits in the Bild article that no “general increase in storms or significant weather events” could be detected“, yet, storms will become “always more extreme and violent”. No trend is there? So what – let’s make a sensational baseless prediction – just for the tabloids!

Just how good a meteorologist is Jung? Not very good if you examine his forecast for the winter. On November 9, 2010 Bild published his seasonal forecast for the 2010-2011 winter, predicting Germany would have a very mild first half of December with temperatures reaching 15°C!

The exact opposite was the case.

He also predicted a short thaw in early February, then followed by another cold snap that would extend deep into March. That now looks doubtful. January and February have been a bit over normal, and looks to continue that way. But let’s give him credit where it is due: he predicted a white Christmas, which turned out right.

Lately we have been hearing a lot about weather extremes, many claiming 2010 was an extreme weather year globally. Just how extreme was 2010? You be the judge, from http://www.coaps.fsu.edu/~maue/tropical/: 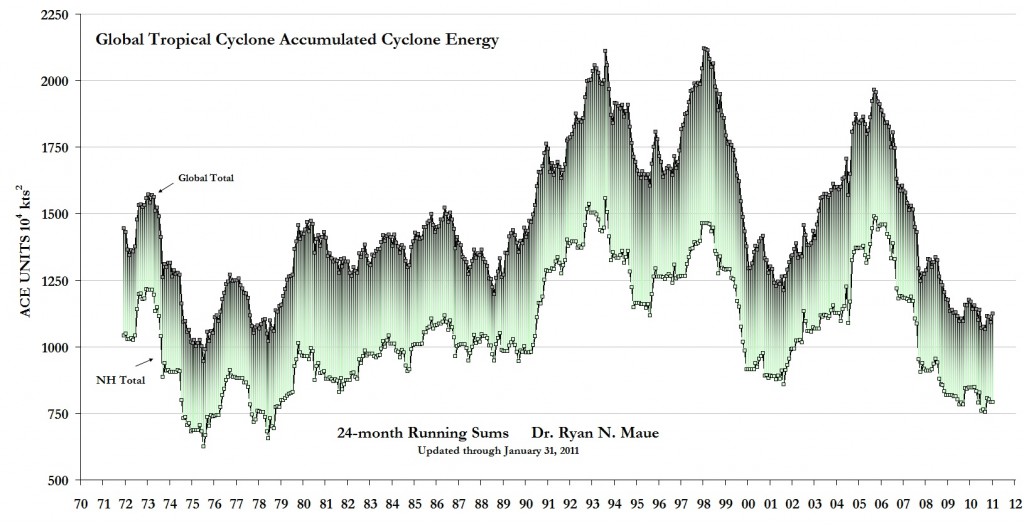 Tropical cylone ACE looks to be close to a record low. But that kind of news news doesn’t qualify to be printed in sensationalist tabloids.

13 responses to “Tabloid Climatology From A Tabloid Meteorologist”