At the surface, the CO2 “back radiation” has been a mystery to many, this author included. Some argue that such a thing doesn’t exist, that it is against the second law of thermodynamics. It does exist, but the mechanism does not work very often, or exactly as advertised. This article will throw you some curves, and many numbers, but will stay away from complicated mathematics. Complex math is unnecessary.

First, the basics: CO2 is a three-atom molecule. It can be visualized as one carbon atom with two oxygen atoms attached, one on each side, in a straight rod configuration. As such, it is “non-polarized”, that is the charges on each atom balance, and the charge on the whole molecule appears to be zero as viewed from any angle. Thus, it has only two modes of vibration when excited by infrared radiation (IR). It can vibrate in and out along the long axis, like a rod that has been struck on one end, or it can vibrate parallel to the axis, like a rod that has been struck in the middle.

The vibration mode along the long axis is only excited in an asymmetric mode, where the end atoms move together in the same direction at the same time. The symmetrical stretch, where the oxygen atoms both move away from the carbon atom then back towards it, does not expose any charge, so doesn’t radiate or absorb radiation. 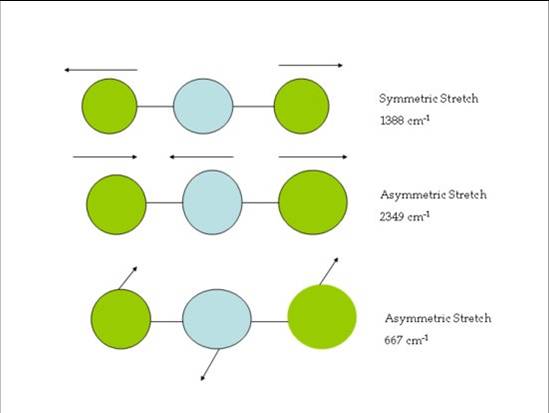 Figure 2. The vibration modes of CO2. From the top, only the 2nd and 3rd modes contribute to CO2’s IR activity. (Source: Chemwiki, UC Davis)

Figure 3 below shows radiation transmitted by the atmosphere. Conversely, that part that is not transmitted is absorbed. Note: only two peaks of CO2 act to absorb radiation that water vapor does not. Those peaks are at 4.25 µm and 15 µm. The 4.25-µm peak occurs at a wavelength that has little long-wave radiation by the earth.

The 15-µm peak is the only one that is important in the greenhouse gas discussion. The atmospheric transmission at that frequency is such that less than 5% of the radiation gets through a 1-meter path at one atmosphere with the normal amount of CO2. This means that any radiation from the ground at the wavelengths that CO2 will absorb and re-radiate will be intercepted very close to the ground, most of it within a meter. The standard story is that when the energy is re-radiated, half goes up and half goes back down to the ground. But here is the rest of the story:

When a CO2 molecule is irradiated, it takes from 7 to 15 microseconds (a microsecond is 10-6 seconds) before it re-radiates. In air at standard pressure (1000 millibars), the air molecules are undergoing 1010 (10 billion) collisions per second. This means that before the CO2 molecule can get rid of the energy by re-radiating, it has very probably gotten rid of the energy thermally by colliding with other air molecules, oxygen and nitrogen, that do not re-radiate, about 100,000 times. It is true that some CO2 molecules will gain energy by these same collisions, at room temperature about 5% are excited at any time, but most of them lose the energy thermally before they can radiate.

At the surface, the ground is radiating long wave IR into the atmosphere. But, as described above, that radiation does not go very far. Half of it is absorbed in a few centimeters. If “back radiation” exists, some of the energy would be returned to the ground, but on the way back to the ground, CO2 molecules would absorb an additional fraction. That heat is then further absorbed by more thermal collisions with other air molecules. In any case the result is heated air.

This is especially visible above dark, flat surfaces, like asphalt roadways, or flat gravel deserts, if conditions favor, as an interior mirage, as in figure 1. An interior mirage occurs when the air at ground level is hotter than the air above it, making the ground level air less dense, thus with a lower index of refraction. This acts as a crude lens, making things higher up in the background, like the sky, hills, or higher background objects appear as if they were inverted at ground level. The sky or distant terrain can sometimes look like rippling water in this situation.

This phenomenon does not happen everywhere, only where conditions are right to hold the hot air at the surface and where IR heating is high. Any vertical relief, such as sloping ground, trees, grass, brush or other vegetation, will encourage convection and interfere with the radiation, and the warmer air will rise away from the surface. Lighter surfaces and vegetation also have less emissivity, thus there is less IR to interact with CO2. It does not happen over water, ice, or snow. Over those surfaces, another type of mirage happens, a superior mirage. 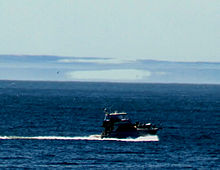 Figure 4. This is a superior mirage of Point Reys National Seashore seen in the background from San Francisco Bay. The image is not inverted. Point Reys is over 50 kilometers away, and over the horizon from this location. Source: Wikipedia Commons.

A superior mirage occurs when the air is colder and denser at the surface than higher up, and refracts a distant image along the surface, sometimes one that is over the actual horizon, making it visible as in Figure 4. This is an indication that IR heating is not taking place. We know that IR heating will not take place over ice or snow, because both the temperature and the emissivity are low. It does not take place over water because the water temperature and air temperature over it are usually very close. Any heat generated by IR is lost to water evaporation.

What happens to an inferior mirage when CO2 increases? The atmosphere becomes a bit more opaque at the wavelengths where CO2 absorbs energy, and the height where the energy is absorbed lowers slightly. Instead of 95% absorbed at 1 meter, we have 95% absorbed at 80 cm. Only where it is absorbed changes, not how much. There would be little difference in appearance of the mirage, and no difference in heating.

Some readers will say that my explanation is wrong; that an inferior mirage is simply from the surface heating the air by conduction. Air is an insulator. There is some heating of the air by convection, especially if the surface is sloping or irregular, but most of the air heating is by radiation.

There is no “back radiation” if the air is cooler than the surface, because heat (radiation) cannot flow from a cooler body (the air) to a warmer body (the ground surface). There is only radiation upward from the hot ground to the cooler air, which is then absorbed by the CO2 in the air. If the air happens to be warmer than the ground, then radiation can flow the other way and heat the ground, but this is rare. For a good tutorial on the subject of heat flow, go to this site, and download Chapter 26 – Heat Transfer.

In summary: The ground surface is heated only by solar shortwave radiation. This heats the ground, which then radiates long wave IR back into the atmosphere. At the wavelengths where CO2 and water vapor are opaque, this IR is absorbed and heats the atmosphere. If CO2 increases, only the height at which this happens changes. This height is very close to the surface, on the order of 1 meter or less. Back radiation only happens if the air is warmer than the ground. At elevations above 1 meter, the atmosphere is in LTE and increased CO2 does nothing. At the TOA, increased CO2 can radiate to space, cooling the TOA.

Increased CO2 warming is nothing but a mirage.