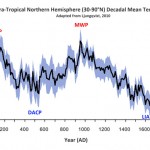 Share this…FacebookTwitterThe Swiss online NZZ from Zurich has a report on a recent multiple-proxy temperature reconstruction produced by a Swedish team of scientists. It wasn’t that long ago when European media outlets were saying Mann’s old hockey stick was settled science – that is until a series of scientific and statistical analyses by leading experts debunked […]