The Swiss online NZZ from Zurich has a report on a recent multiple-proxy temperature reconstruction produced by a Swedish team of scientists. It wasn’t that long ago when European media outlets were saying Mann’s old hockey stick was settled science – that is until a series of scientific and statistical analyses by leading experts debunked it and the pressure to drop it became too much to bear.

Now Europe’s media are quietly abandoning it and returning to what years and years of reliable literature originally had stated: The temperature trend over the last several thousand years was by no means flat and that there were periods that were just as warm, if not warmer than today.

Here’s the 2000-year reconstruction of the Swedish team I found at the NIPCC site: 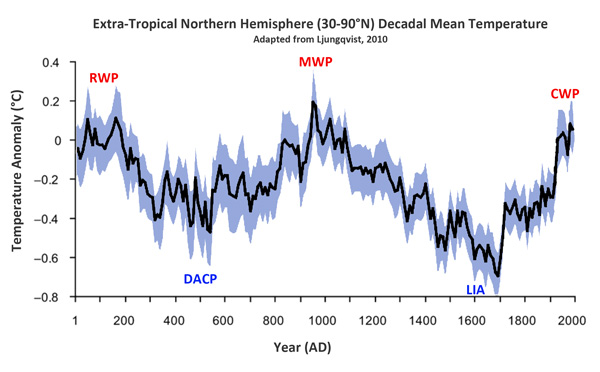 The meticulous new reconstruction was produced by scientists of the University of Stockholm, led by Fredrik Ljungqvist, and the results were published last year in Geografiska Annaler. It’s a temperature reconstruction of the extra-tropical northern hemisphere (30°-90°N)  over the last 2000 years.

Eduardo Zorita of the Helmholtz Centre in Geesthacht Germany says it’s one of the best reconstructions he’s seen, and reminds us that proxy reconstructions aren’t easy. NZZ quotes Zorita:

Errors can be avoided only when paleoclimatologists and statistics experts work closely together. The right method for reconstructing temperature history hasn’t really been found up to now.”

Even when done meticulously, uncertainties can’t be eliminated. According to the NIPCC, this reconstruction was based:

Perhaps the temperature dips of the past are even greater – Ljungqvist suspects that the cold of the Little Ice Age is underestimated.”

There’s still a lot of discussion on whether the current modern period is warmer than the MWP and the Roman Period. The study indicates that it was warmer in the past. The reconstruction also shows that the current warming started already way back in the early part of the 18th century, i.e. long before man started emitting CO2 in earnest. So what could be the cause of the temperature fluctuations? The NZZ writes:

Considered as causes are external factors such as volcano eruptions and solar changes, but also internal climate processes.”

The NIPCC also provides additional quotes from Ljungqvist, who notes:

…the second century, during the Roman Warm Period, is the warmest century during the last two millennia,”

…the highest average temperatures in the reconstruction are encountered in the mid to late tenth century,”

Clearly the evidence shows that nothing unusual is happening. The Swedish reconstruction also uses “Mike’s nature trick“, tacking on the instrumental record for the last 20 years, but does not cover this up. And what about the claim that CO2 is causing the temperature to rise? Here’s how the NIPCC sums it up:

That claim — for which there is no supporting evidence, other than misplaced blind faith in climate models — is totally bogus.”

Do you now hear the hisses and gnashing of teeth from the AGW cultists?

Interestingly, the traditionally green NZZ first starts its story by glossing over some background and history on tree-ring temperature reconstructions, mentioning “pioneer” Michael Mann’s work and his iconic hockey stick graph, and provides some details about its embattled story, writing:

…skeptical activists even accused Mann and other paleoclimatologists of fraudulently fabricating the curve.”

The NZZ refuses to believe this of course, but Mann most certainly did. But we understand the greenie media – sometimes it’s hard to say goodbye to an old friend that had served them so well. Good riddance to one of the most corrupt chapters in the history of modern science.

130 responses to “From Hockey Sticks To Boomerangs”