New Earth-Moving UN Study Says Half Of Arctic Warming Caused By Soot (And Not CO2)!

CO2 being the primary cause of global warming is disappearing – fast. Now a new UNEP-sponsored study says.

Half of the temperature increase in the Arctic can be traced to black exhaust dust (soot).

Because of these new findings, the so-called German Environment Aid group (DUH) is now calling for diesel filters for heavy construction machinery.”

Ed Caryl wrote about black soot’s impacts on glaciers some time back, read Glaciers – The Dark Side.

Okay – the UNEP study says “half the Arctic warming” and not half of the “global warming”. But recall that scientists have long said that global temperature rise would be most apparent in the Arctic. Now that we know half of it is caused by black soot, then it indicates the problem over the rest of the globe is nowhere near as bad.

‘The UNEP study is so important because it has finally offcially identified soot particles as a climate driver,’ said Axel Friedrich, international transportation consultant. “The detrimental effects of CO2 on climate have been discussed for a long time, while the topic of soot was always ridiculed.’ “ 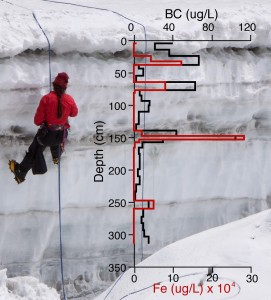 Of course these concerned environmentalists would like to have us believe that soot is equally as harmful as CO2. But all they have done is convinced me that CO2 is much less a problem then they’ve been claiming.

And another important factor in warming from 1980 – 1998 (there has been no warming since 1998) are the oceanic oscillations, which were in their warm phase from 1980 – 1998. That doesn’t leave much room left for CO2. Call it the incredible shrinking CO2 warming effect.

I think the call for exhaust filters is a reasonable proposal and I’d support it. I’m in favour of less soot in the air that I breathe. Filters wouldn’t be that expensive, and would have a real impact – if the study’s results are true.

Frankly, I think the study is a bit odd in that it places most of the blame on construction equipment. Maybe the environmental groups are trying to shake down the construction equipment manufacturers for money. Factory production and the earlier, very dirty burning of coal by power plants certainly had an impact that was equally great, if not much greater.

25 responses to “New Earth-Moving UN Study Says Half Of Arctic Warming Caused By Soot (And Not CO2)!”