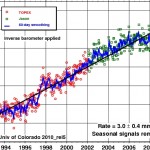 Share this… Facebook TwitterAccording to innovations-report.de, a new paper on Antarctic and Greenland ice sheet melt will be published in the Geophysical Research Letters later this month. Its title: Acceleration of the contribution of the Greenland and Antarctic Ice Sheets to sea level rise. It’s authors: E. Rignot and I. Velicogna both of the University of California, Irvine, California; […]

Share this… Facebook TwitterThe proposed 270 billion per year plan (€10.8 trillion total by 2050) for Europe to reach its target of becoming a low-carbon economy and society presented by Climate Commissar Connie Hedegaard yesterday has received a cool reception. While the industry says not no fast – it’s too expensive, the environmentalists are complaining that […]