According to innovations-report.de, a new paper on Antarctic and Greenland ice sheet melt will be published in the Geophysical Research Letters later this month. Its title: Acceleration of the contribution of the Greenland and Antarctic Ice Sheets to sea level rise.

According to innovations report (emphasis added):

The authors conclude that if current ice sheet melting rates continue for the next four decades, their cumulative loss could raise sea level by 15 centimeters (5.9 inches) by 2050. When this is added to the predicted sea level contribution of 8 centimeters (3.1 inches) from glacial ice caps and 9 centimeters (3.5 inches) from ocean thermal expansion, total sea level rise could reach 32 centimeters (12.6 inches).

Here, we present a consistent record of mass balance for the Greenland and Antarctic ice sheets over the past two decades, validated by the comparison of two independent techniques over the last 8 years: one differencing perimeter loss from net accumulation, and one using a dense time series of time-variable gravity. We find excellent agreement between the two techniques for absolute mass loss and acceleration of mass loss. In 2006, the Greenland and Antarctic ice sheets experienced a combined mass loss of 475 ± 158 Gt/yr, equivalent to 1.3 ± 0.4 mm/yr sea level rise. Notably, the acceleration in ice sheet loss over the last 18 years was 21.9 ± 1 Gt/yr2 for Greenland and 14.5 ± 2 Gt/yr2 for Antarctica, for a combined total of 36.3 ± 2 Gt/yr2. This acceleration is 3 times larger than for mountain glaciers and ice caps (12 ± 6 Gt/yr2). If this trend continues, ice sheets will be the dominant contributor to sea level rise in the 21st century.

Jason/Topex however don’t show an acceleration in sea level rise over the last decade or so. If anything, one sees a deceleration. One has to wonder if ice sheet melt is still accelerating. It may have in the 1990s, but there’s plenty of data that say it isn’t so today.

One also has to question sea level rise due to thermal expansion. Ocean heat content does not seem to be rising. As far as measuring sea level rise, it is an extremely complex affair that is fraught with vast uncertainty. I’d also be very suspicious of anyone claiming they can measure sea levels to the millimetre. It’s hard enough to do it in inches. That’s why sea level projections among experts range so widely. Of course, that allows a lot of flexibility when drawing conclusions. 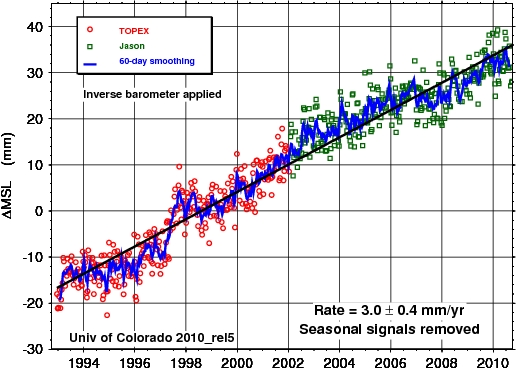 There are a number of studies out there that show no sea level acceleration. So one has to wonder where all those gigatons of melted ice sheet are going, and how much of it is being compensated by ice accumulation in other areas.