Share this… Facebook TwitterAnd attention morons, drones, and other like-minded believers in superstition and ritual behaviour. At 8:30 p.m CET tomorrow evening it is Earth Hour. It’s that time again to participate in yet another useless collective ritual of madness, by switching off the lights along with all the other drones, in a bid to get the climate gods […] 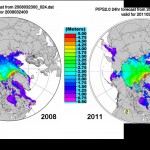 Share this… Facebook TwitterBack in January I wrote about how the Arctic had gained 2000 cubic kilometres in ice volume. This was calculated by comparing the sea ice thickness of January 2008 to that of January 2011, see the following chart. Blue color shows thin ice, while green shows thicker ice. Clearly the Arctic’s ice […]