The Canadian Prairies and the United States North Central regions are experiencing one of the worst flood seasons going back some 350 years, read here, here, here, and here. The reason for these floods is not well reported or researched by our media.

These floods stem from the extreme cold and the significant snow extent that fell in the central North America during the past winter. The very significant initial spring snow melt followed by a cool and very wet spring has resulted in more water than the ground could possibly hold. Some areas are having continuous flooding and have received two floods already and may get a third flood as well from new heavy rainfall.

US And Canadian temperatures have been falling

Unreported by the media are the news that the annual and winter temperatures have been falling over most areas of US and southern Canada [excluding the north] since 1998, and more significantly during the last 4 years [see below]. So how can the floods be due to warming?

Winter temperatures in the USA have been plummeting:

Winter temperature departures from 1948-2011 for the Canadian Prairies and Northwest Forest Regions for 1998-2011. Source: Environment Canada

Snow extent is also on the rise:

Snow depth in Northern US And Southern Canada in April according to the NOAA: 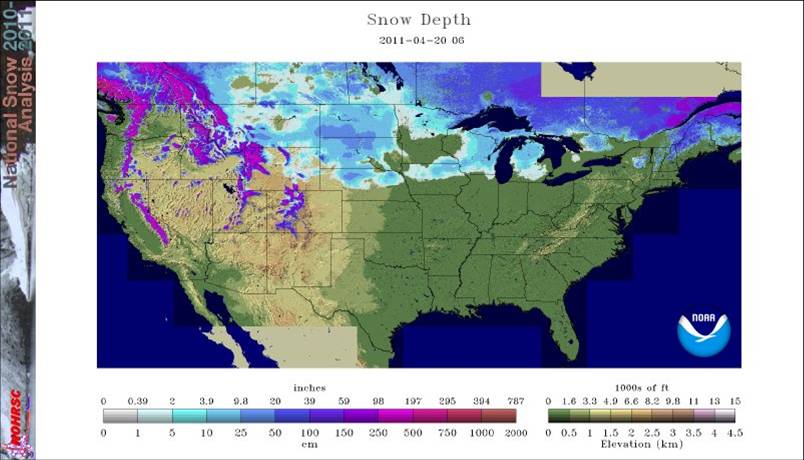 As winters cool, more snow accumulates, which contributes to flooding. As temperatures cool, how can the flooding be due to warming?

While AGW climate scientists and some world governments are mainly focused on the non-existing global warming, the globe is actually cooling and the impact of this cooling is far greater and more imminent than that of global warming 100 years from now, as these floods clearly illustrate.

This colder and wet weather means that crops cannot be planted and the entire season could be lost for the affected areas. These regions are the bread baskets of the globe and we should all be concerned. Over 1.2 million hectares of farming land may already be lost for farming this year in the Manitoba, and Saskatchewan region alone as recently reported on our news. Similar losses may happen in the United States.

More floods in the future – due to cooling

We are likely to see many more spring floods in the upcoming years like the 2011 floods because the cold winters are returning and could be with us for the next 20-30 years – like we had during the late 1970’s as the Pacific and Atlantic Oceans cool and lose their current heat content. These inland areas of North America are clearly cooling faster than the coastal areas since their climate is not moderated by still warm oceans. This will change in the future as the oceans start to cool and coastal areas will also get colder like Western Europe and Eastern North America. 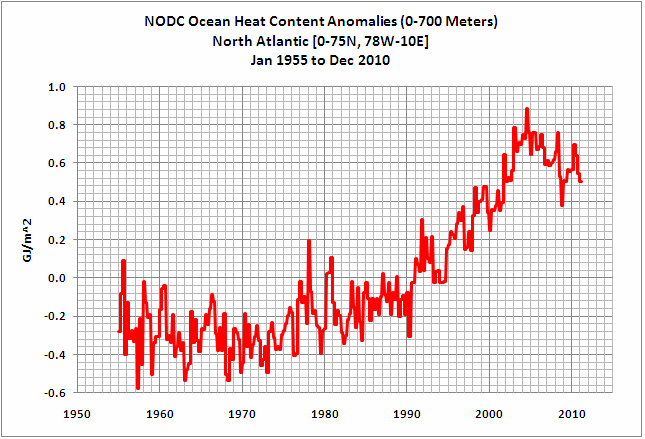 These events, like the cold and snowy winters, extra flooding and severe tornadoes, have very little to do with man-made carbon dioxide or global warming as the global temperatures have been cooler than normal this winter and the early part of this year, and global and regional temperatures have actually been declining.

The expensive and misguided anti-global warming policies divert valuable funds from other vital areas of our global life, like helping nations who are suffering and experiencing natural disasters, improved flood control, rebuilding homes and infrastructure after tornadoes and major flooding and extra food storage for emergencies as well as job creation, better health care and poverty.

In my judgment this problem could get much worse in the coming years. Like the Pacific Ocean, the North Atlantic Ocean is also cooling again and by 2015 we could begin to feel even cooler weather during the winter and spring especially along the North American eastern coasts and Western Europe. Food and energy could be in short supply unless we all adjust our national and global focus from a non existing global warming threat to a much bigger and very current threat from global cooling for the next 20-30 years.

In summary, the message of this brief article is that we are totally focused on the wrong weather. The impact of global and regional cooling from our winters is much more severe and immediate than any minor impact of global warming 100 years from now, the effect of which may never materialize. Our limited financial resources are being channeled in the wrong direction with little benefit to the planet or to humanity.