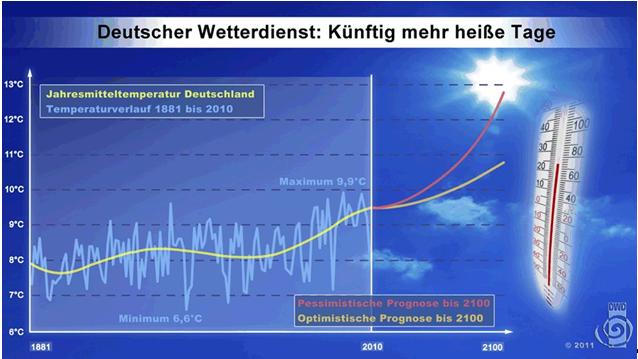 Not surprisingly, the chart has the typical catastrophic hockey stick shape. Peter Heller at Science Skeptical here closely examined the chart and found a number of deceptive irregularities that all serve to dramatize the future. As a result he dubbed it: a spot-the-errors diagram.

Can you spot the errors? Peter Heller has.

For some people, especially children, a spot-the-errors diagram is a lot of fun. But there is nothing funny about errors and inaccuracies in scientific diagrams. This at times is purposely done in political debates in order to hide just how poorly certain claims truly are. How diagrams can be used to mislead is well known. There are books and plenty of articles about it everywhere. Still, it’s attempted time and again, and often successfully. One particularly perfidious example has been produced by the German Weather Service (Deutsche Wetterdienst – DWD). The following graphic was brought to my attention by the European Institute for Climate and Energy (EIKE) in a recent article. 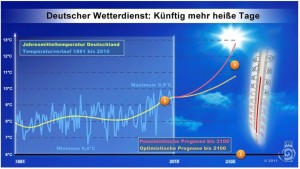 Figure 1: The DWD “spot the errors” diagram. (Click to enlarge)

Figure 1 shows the diagram with curves and three dots I’ve added to denote 1) the error, 2) the deception done on purpose, and 3) the inconsistency.

Dot no. 1: the error
The DWD uses a 5th degree polynomial curve (yellow) to smooth Germany’s temperature record (annual mean 1881-2010) in order to clearly illustrate the trend. No question here – that’s perfectly okay to do. Figure 2 is my attempt to reproduce the curves and it shows a somewhat different polynomial trend curve, namely at the end it is flat and in no way increasing upwards as calculated by the DWD. The flattening of the curve is due to the comparatively cool 2010, for which the DWD calculated a mean temperature of 7.8° C. Using the polynomial curve that the DWD uses, I also get a flat end…that is when I use a temperature of 8.6°C for the year 2010. Probably an error. 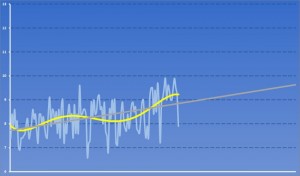 Dot no. 2: the deception

Of course the purpose of the graph is to show the horrific climate change that lies ahead for Germany. This becomes especially pronounced when one draws curves that rise upwards as dramatically as possible after 2010. To amplify the the rate of increase, one simply employs a more effective horizontal scale. Hey, who is going to notice? And so after only 40 years the curves shoot up into an apocalypse. But notice how the horizontal axis shows the year 2100. Maybe DWD just wanted to make some room for the thermometer to make the chart look prettier. In the end, this ends up being an intentional deception in order to make the future look more dramatic. 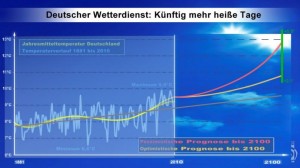 Figure 3: Graphic using a correct scale for the future. (Click to enlarge)

Dot no. 3: the inconsistency

In Figure 3 I simply superimposed my diagram over the original DWD diagram and gave the chart the correct scale on the right side of 2010. You can already see the difference in both polynomial curves (yellow). The gray line is the linear trend (which the DWD opted not to show) that allows a prognosis. Suddenly much of the drama gets lost. Here one must recall the following: A prognosis is always the extrapolation of a known trend. One can make a prognosis completely independent of having knowledge of the fundamentals behind the trend. And in the following case, making a prognosis would simply mean extending the fluctuation of the annual mean temperature (yellow line) about the gray line. The orange and red lines in Fig. 3, on the other hand, are DWD projections and not prognoses.

To do these projections, models were used that most likely are in accordance to what is propagated by the IPCC, see Figure 4. In any case, there is good agreement with the calculations used in the recently DWD published “Regional Climate Atlas“, which is green in the graphic. The “Klimaatlas Deutschland” has quite identical results and can be seen at the DWD website.

Interestingly the course of the DWD projection between 2011 and 2100 in Figure 1 is completely different than what is shown in Figure 4. It is concave, turning sharply upwards, and not convex. I would at least call this an inconsistency.
We can summarize as follows: The DWD, as a public institute directly subordinate to the German Federal Government (Ministry of Transportation, Construction and Urban Development), believes it is correct and important to take a clear position in a highly political issue in a press conferencez. And to support this position it resorts to using a diagram that has errors, deceptions and inconsistencies that contradict to its own calculations. All of these are perfidiously placed in the diagram in a way they are not easily detectable. One indeed has to look very closely. All three of the elements happen to dramatize the situation. That’s not a good way to build trust.