Halloween is already in full swing at the Potsdam Institute For Climate Impact Reseaarch in Germany. Witches, goblins, flesh-eating zombies and scary monsters are stirring about and spreading disturbing horror visions. Right now Stefan Rahmstorf is frozen by such a vision like a deer in the headlights. 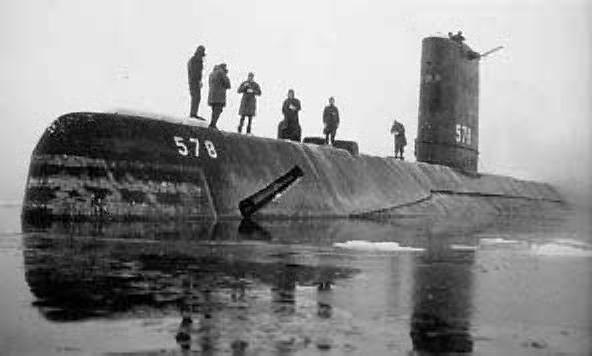 Rahmstorf, who has the unscientific habit of taking cyclic graphs and drawing straight trend lines along their upward or downward flanks and extending them all the way out to doomsday, presents the latest horror vision that has been haunting his mind lately. Indeed the visions seem to be getting more intense and vivid. In a piece in the Gulf Times he warns of “grave warning signs”.

Obviously he appears unaware of the fact that the Arctic all but melted away in the 1950s (see photo above) before rebounding to the record high levels of the 70s. You can’t start at the top of a cycle a draw a straight line along its downward flank all the way to yonder (hat-tip DAmbler):

A grave warning sign in the Arctic
By Stefan Rahmstorf /Berlin

Largely unnoticed, a silent drama has been unfolding over the past weeks in the Arctic. The long-term consequences will far outstrip those of the international debt crisis or the demise of the Libyan dictatorship, the news stories now commanding media attention. The drama – more accurately, a tragedy – playing out in the North is…continue reading