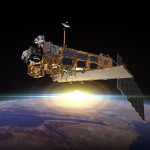 Share this… Facebook TwitterWhat follows is a press release from ESA today: ESA declares end of mission for Envisat Just weeks after celebrating its tenth year in orbit, communication with the Envisat satellite was suddenly lost on 8 April. Following rigorous attempts to re-establish contact and the investigation of failure scenarios, the end of the […]

US Senate Candidate, Landslide Primary Winner Mourdock: “Debate Is Not Over On Global Climate Change”

Share this… Facebook TwitterThe (un)Scientific American has an opinion on the US Senate Republican primary race in Indiana and challenger Richard Mourdock. So what can we expect from the new GOP candidate when it comes to climate change and science? First note, however, that his Democrat opponent is also no stooge of the warmists’ hoax. According […]

Share this… Facebook TwitterPhysicist and meteorologist Klaus-Eckart Puls was interviewed by Bettina Hahne-Waldscheck of the Swiss magazine “factum“.I’ve translated and summarized the interview, paraphrasing for brevity. factum: You’ve been criticising the theory of man-made global warming for years. How did you become skeptical? Puls: Ten years ago I simply parroted what the IPCC told us. […]