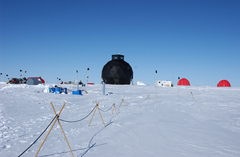 Not long ago the catastrophe-obsessed scientists of the Potsdam Institute for Climate Impact Research claimed that another 1.6°C of warming may be enough to melt all of Greenland’s ice and cause global sea levels to rise catastrophically.

Keep in mind that the PIK is probably the biggest producer of catastrophe stories in the world after Hollywood.

Prof. Fritz Vahrenholt and Dr. Sebastian Lüning now say this fringe scenario has been handily refuted, citing a new, recently published international study authored by scientists of the Alfred Wegener Institute and others. They write:

Good news coming out of Greenland. A new study involving the Alfred Wegener Institute (AWI) of Bremerhaven has refuted earlier horror scenarios of the Potsdam Institute for Climate Impact Research (PIK), which claimed that a warming of 1.6°C possibly could lead to a complete meltdown of Greenland’s ice mass.”

The AWI study contains a surprising conclusion, say Vahrenholt and Lüning, who write at their Die kalte Sonne blog:

The surprising conclusion of the study, which appeared in the journal Nature: At air temperatures that were as much as 8°C higher than those of the 21st century, the ice mass melted far less then when compared to what was recently suspected. Back then the Greenland ice sheet played a far smaller role in the global sea level rise during the Eem interglacial than what was previously assumed. Should the current temperature rise in Greenland continue, then the reactions of the ice sheet in the wake of the Eem warm period apply as possible future scenarios for the ice mass on the island.”

To the contrary: From the peak in the glacial period prior to the Eem, about 400 meters were lost in size, and it was 130 meters lower during the Eem 130.000 to 115.000 years ago than it is today. In the same time period it’s volume shrank a maximum of one quarter.”

The good news of the study was that the Greenland ice sheet did not react as sensitively to this temperature rise as previously thought.”