For some areas we are now hearing that it is being called the “100-year winter“! 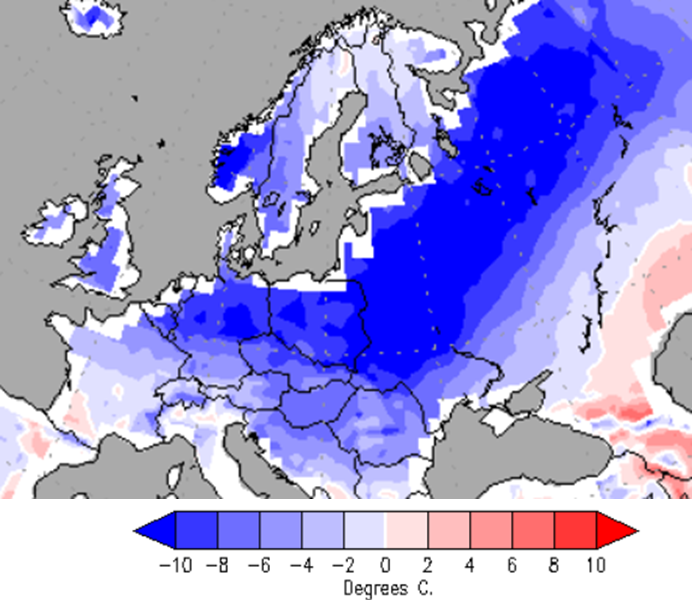 Temperature forecast anomaly for the next 7 days. Source: http://wxmaps.org/html.

Berlin freezes in 100-year winter.
Lots of snow and bitter cold until the end of March – Berlin hasn’t seen this in more than 100 years.”

Forget the tall tales spread by Mojib Latif. We haven’t forgotten what real winters are. We just haven’t seen anything like this since measurements began in 1895!

‘There has never been anything like this in Berlin in the last third of March since snow measurements began in 1895,’ says weather expert Friedemann Schenk of the Meteorological Institute for the Freien Universität (FU).”

The English-language The Local here reports that Germans should not expect spring to arrive anytime soon, as the German Weather Service (DWD) warns that “the record-breaking wintry weather will continue until Easter“.

This weekend will be especially cold. T-online news site writes:

In the east, temperature readings will drop dramatically – many readings will be -10°C, as low as -13°C in some spots. ‘Some cold records for end of March will fall,” prophesies Ruhnau.”

Germany’s RBB forecasts temperatures down to -15°C! The extreme cold overall will make this March in Central Europe the coldest and snowiest in over 40 years – at least.

Record-breaking levels of snow fell in other areas of the northeast – namely in Laage, Mecklenburg Western-Pomerania, where a blanket of 27 centimetres of snow smashed the region’s previous 2005 record for the time of year by six centimetres. ‘For March 20th, the amounts are impressively high,’ said Simon Tripper, a meteorologist from the DWD, on Wednesday afternoon. “