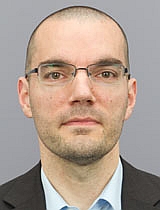 German climate catastrophe-obsessed blogsite klimaretter.com here has a 2-part story on a recent alarmist panel discussion held in Berlin and sponsored by Germany’s version of the Guardian, the TAZ. The panel discussion was dubbed: “The climate conference circus!  Just how stupid is it?” The motto of the 2-hour discussion: “It can’t keep on like this!”

A better title may have been: Is it better to keep pretending? That’s the question the discussion panel addressed – for real!

The main speakers were the constantly climate-petrified Stefan Rahmstorf of the Potsdam Institute (PIK), and green thinker Oliver Geden (photo above right) of the German Institute for International and Security Affairs.

The two experts are not at all happy that their beloved green movement is horribly bogged down in an endless swamp with no hope of ever getting out. Geden unloaded over the crumbling green movement and especially the 2°C target: “a placebo designed to pacify society“, an instrument that allows people “to act like they are doing something when in fact they are not.” He called the 2°C target “nothing but talk“. Geden has had enough and is now calling on the warmists to wake up and face the truth: “The 2°C target is hopeless.”

Recall that for German warmists the “2°C target” is really just a code-word for “almost complete decarbonisation by 2050”.

To reach the “2°C target”, Rahmstorf claims that “not a single conventional power plant must be allowed to be built globally after 2017” and that the planet would have to reduce its GHG emissions 10% by 2020. An impossibility.

And slowly it is beginning to dawn on the diehard warmists that reaching this pie-in-the-sky CO2 reduction target is a pipe dream of the 10th order. In fact the opposite trend is today’s reality: CO2 emissions rose in 2012 and coal is making a comeback. Geden sees it, and commented on the “2°C target”: “We are living in a fantasy world.” Geden is now asking his fellow warmists to come to terms with this reality.

But the warmists and Rahmstorf refuse to hear it. If the 2°C target is abandoned, then the whole thing goes.

Rahmstorf blames the spiraling failure on policymakers, saying: “the political resolve is missing“. Yet Rahmstorf and the audience refused to share Geden’s pessimism and demands to face the reality. According to klimaretter, Rahmstorf defiantly declared: “We will fight to the end!” The crowd applauded for the first time, klimaretter writes.

Klimaretter at the very end poses the following (remarkable) question:

Are we playing into the hands of the climate protection opponents when someone like Geden requests that we really have to be honest and declare the 2°C target almost impossible to reach?”

Say what! Yes. this is the question the warmists are now struggling with. Put in simple words: “Do we accept reality, or is it better to keep pretending (so that we don’t maybe play into the wrong hands)?” Unbelievable lows the warmists have maneuvered themselves into.

It’s over. They’re in their bunkers with hands trembling.

It has never been possible to build on lies.”

Our skeptical (calm) hands are open and waiting.