Browse: Home / 2013 / April / 25 / Sudden European Temperature Plunge Over The Last Decade…Are We On The Brink Of A Little Ice Age?

The UK Met Office long term Central England Temperature record has kept a continuous and consistent data set since the 1660s. It appears to be reliable and to have maintained its quality. It has not been adjusted as have so many other official temperature record. 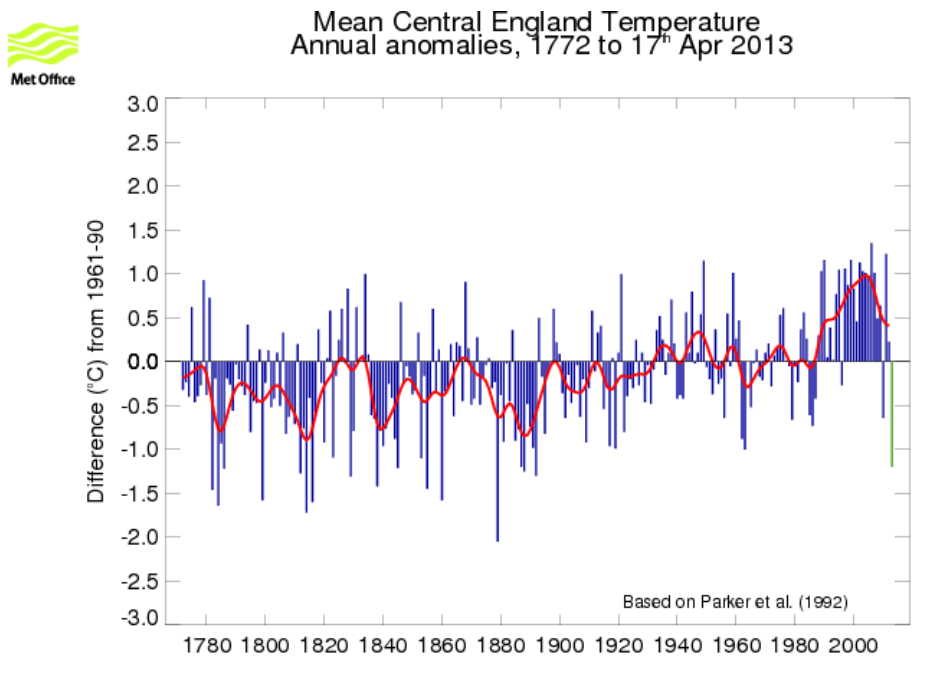 Although the CET record covers only a small part of the northern hemisphere, it has shown a consistent rise since the end of the Little Ice Age in 1850 at a rate of about +0.45°C/century or about +0.67°C in the last 150 years. This rise accords well with other temperature records.

However since the year 2000, diminishing solar activity in solar cycle 24 (moving back towards little ice age patterns) appears to be having a real effect. 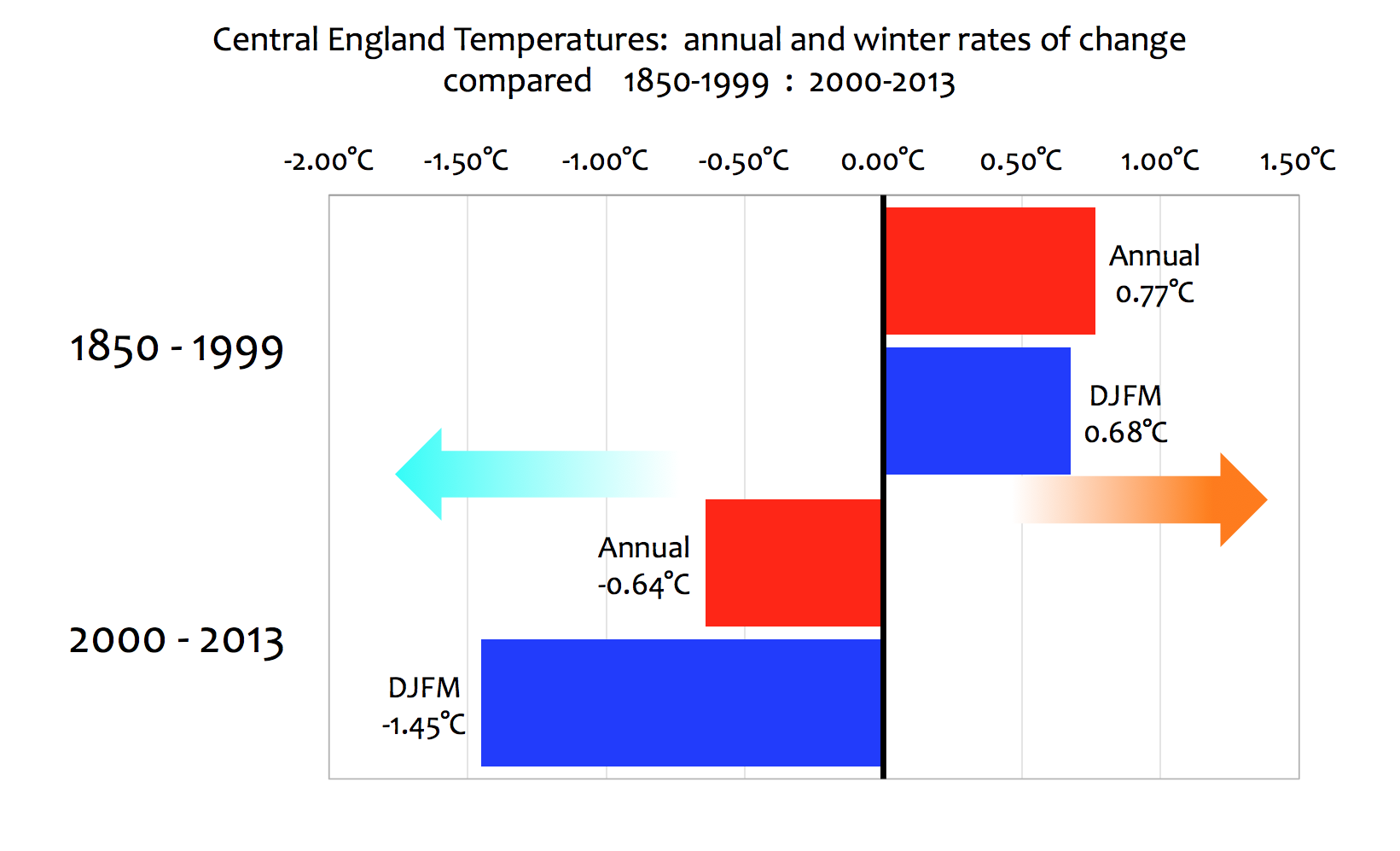 So since 2000 the CET shows an annual temperature diminution at the rate of -0.49°C/decade or -0.59°C in 12 years: this negates almost the entire CET temperature rise since 1850. Although this is a very short period, the extent of the climate change that has been observed since the turn of the millennium is remarkable.

Using the March 2013 CET value, it is possible to show the winter temperature values up until March 2013 with a combination of the four months December – March for the first 13 years of this century. The diminution of the four winter months temperatures is more remarkable at a rate of -1.11°C/decade or -1.41°C in the last 13 years. This compares with a winter temperature increase rate from 1850 to the year 2000 of +0.45°C/century or +0.68°C for the whole 150 year period.

There are substantial shorter term fluctuations in temperature, and since about 1850 world temperatures have been recovering from a Little Ice Age up by about +0.7°C up until the year 2000. These fluctuations have correlated well with solar activity observable by the number of sunspots. There was a particularly active solar period from about 1970 onward coinciding well with sunspot cycles 21 – 22 – 23: it led to comparatively rapid warming. 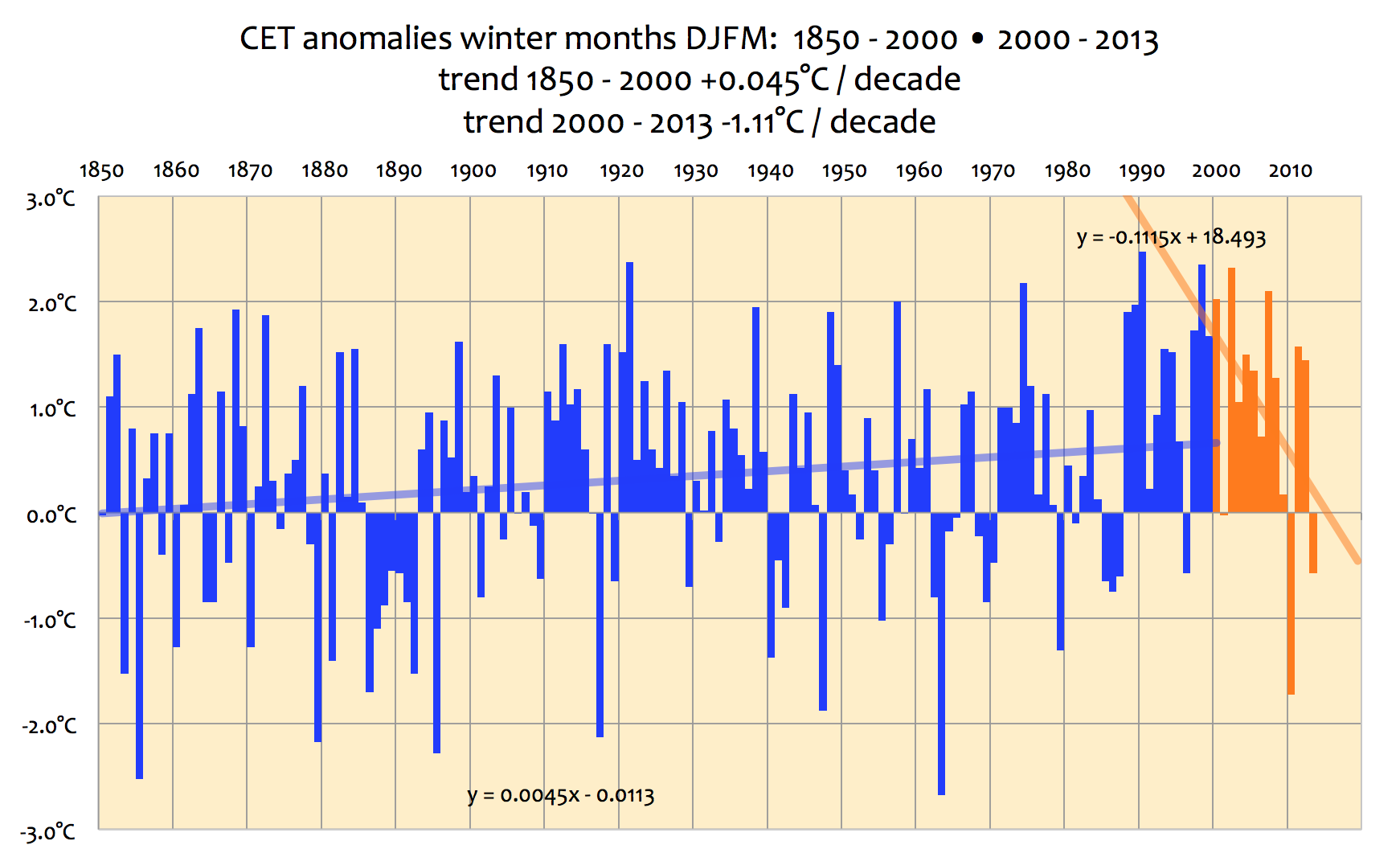 However the current cycle 24 is very much weaker and sunspots are diminishing to the levels of the earlier Little Ice Age.

According to some [2]: “so begins a Little Ice Age”. These colder conditions lead to a southwards diversion of the Jet Stream over Europe, as could be seen on 2/4/2013 [3], when the upper atmosphere air flow was passing over Northern Africa, rather than to the North of Scotland as is normal in warmer times. 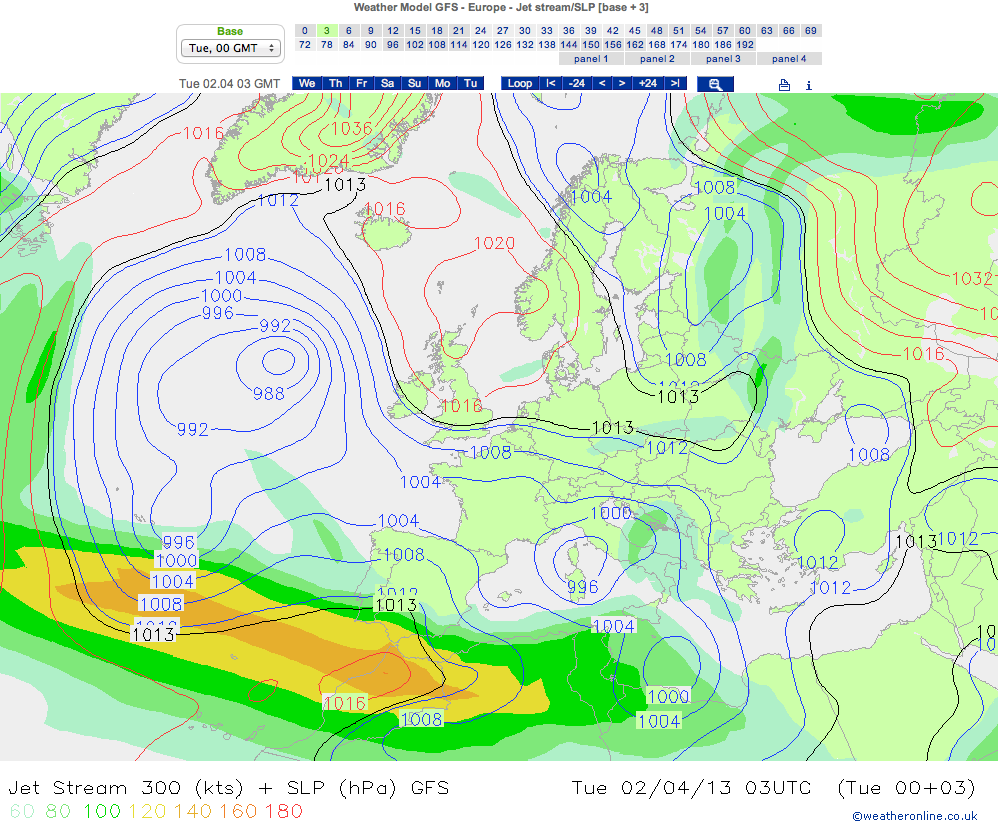 Such a jet stream pattern leads to very wet summer conditions and remarkably cold winters as have occurred in the last 5 years throughout Northern Europe and the rest of the Northern hemisphere. This adverse colder climate could well persist for decades or even hundreds of years, as it certainly did for the pervious Little Ice Age.

Humanity has thrived in our current Holocene interglacial world. The comparatively warm last 10,000 years have been responsible for the development of the whole of civilisation. The GRIP [4] Greenland ice core data, supported reinforced by several other similar long term ice core records, show this effect very clearly.

Over the past 10,000 years the current Holocene epoch has been progressively cooling since the early “climate optimum”. Overall in the 10,000 years the world has cooled gradually by about 1.0 °C. There were other well documented temperature high points during the period, including the Minoan, Roman and Medieval warm periods. 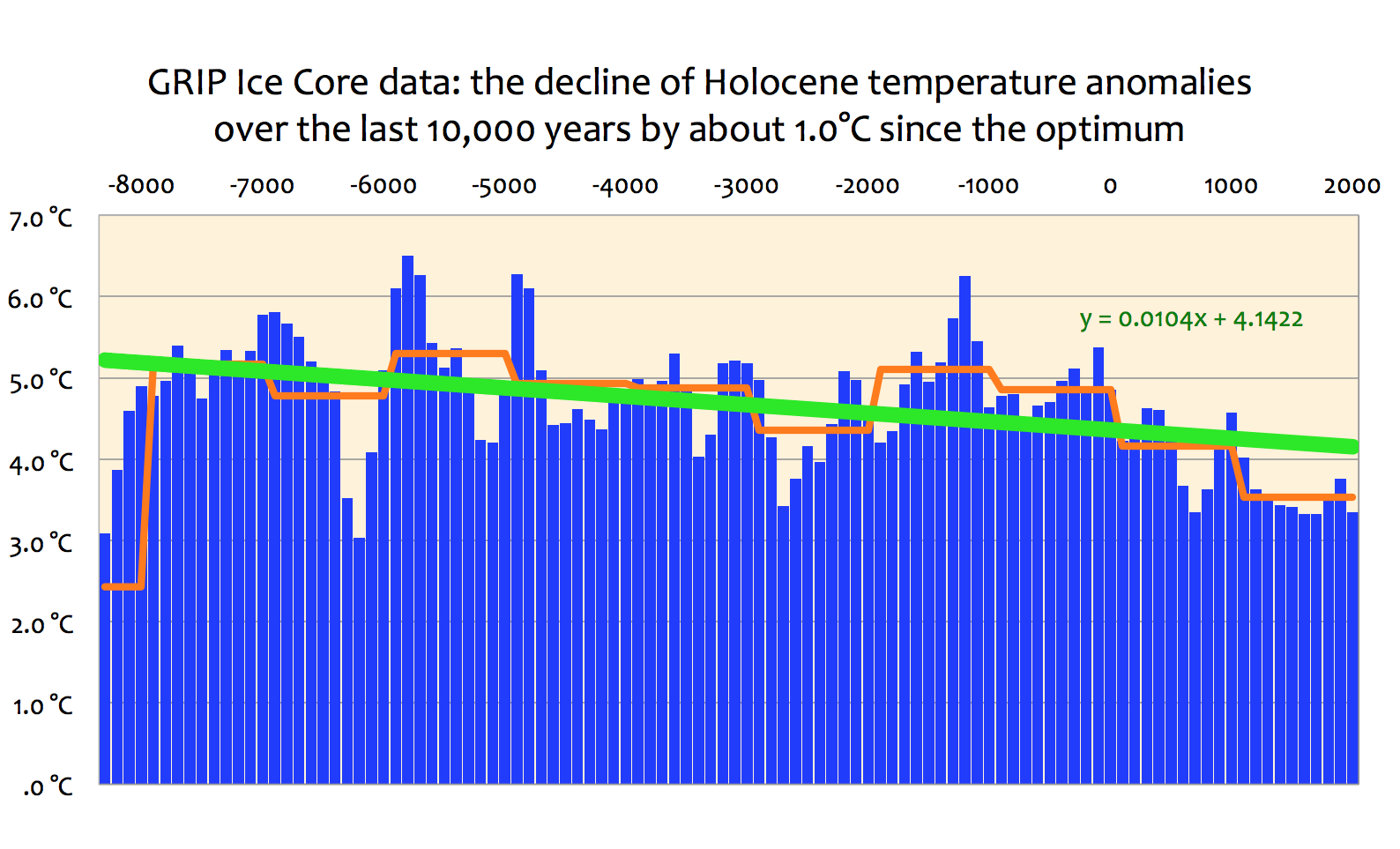 However the most recent period of 1000 – 2000 AD was the coolest millennium of the whole epoch: see John Kehr the Inconvenient Sceptic [5]. 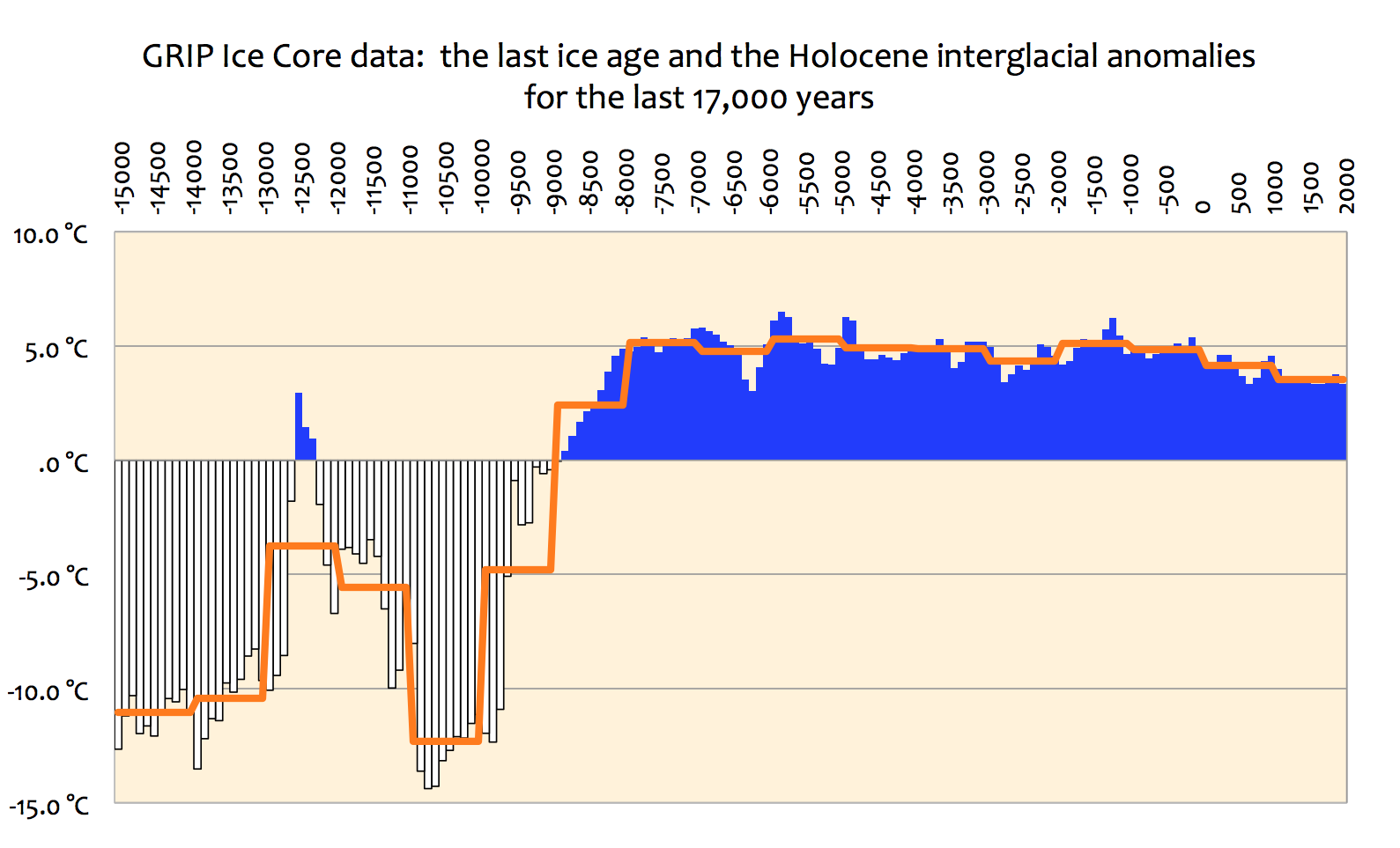 A longer term record shows that only 13,000 years ago the world was in the depths of a real ice age with temperatures about 12°C lower than at present.

So interglacial periods of about 12,000 years have been occurring regularly about every 120,000 years. They are interspersed by real 100,000 year long ice ages, when vast ice sheets cover large parts of the world.

The previous Eemian interglacial epoch was some 130,000 years ago. At its peak it was about 3°C warmer than our current Holocene interglacial: hippopotami thrived in the Rhine delta. The Eemian also lasted about 12,000 years.

The pattern repeats itself [6], there have been 5 interglacial events in the last 500,000 years.

At ~10,500 years our current cooler but benign Holocene interglacial is coming towards its end and the reversion of our planet to a real ice age is foreseeable.

18 responses to “Sudden European Temperature Plunge Over The Last Decade…Are We On The Brink Of A Little Ice Age?”