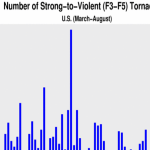 Share this…FacebookTwitterThe German media are now naturally asking what is behind the terrible tornado that struck near Oklahoma City. Tornado frequency. Source NOAA To fool the public, German ZDF public television here, Germany’s version of the BBC, sought out “one of Germany’s most renown climate scientists” Prof Mojib Latif of the IFM-GEOMAR, Kiel, the Leibniz […]

Share this…FacebookTwitterLast week, the German Federal Umweltbundesamt (UBA), Germany’s version of the EPA, issued a one-sided alarmist pamphlet that attempts to declare the climate debate over and attacks prominent skeptics. Controversial 123-page pamphlet…in it the German Federal Environment Agency (UBA) declares climate debate over and names and portrays skeptics as “spreaders of half-truths and misinformation”. […]