Climate History Professor: Bad Weather In History Was Also Blamed “On A Conspiracy Of Witches”

On 22 June 2013 the Swiss newspaper Basler Zeitung published an interview with climate historian Christian Pfister . Director of Business, Social, and Environmental History at the University of Bern, Switzerland. There’s been a lot of grumbling in Europe this spring due to the cold and wet weather, and so the Swiss daily decided to check what#s behind it all. 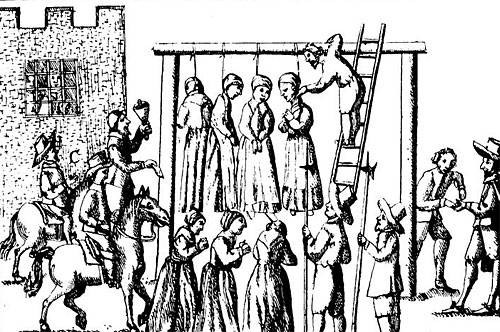 According to Pfister, the weather has always been fickle throughout history, and is nothing unusual today.

Not surprisingly hysterical minds in the past also blamed bad weather on humans. The Basler Zeitung writes, “Christian Pfister advises us to calm down with regards to the cold, heat, winds, hail and storms. There’s been far worse than what we’ve seen this year” and reminds us that “We are powerless against the weather“.

Here are some excerpts of the interview:

Let me tell you what happens when the weather really freaks out. Imagine that it has hardly rained over the last 11 months. The leaves fall drom the trees in the middle of the summer, cattle die of thirst, forest fires rage. You can walk far into Lake Constanz like during a very dry winter, the Rhine dwindles to a creek. The water boils.

When did that happen?

In 1540. An almost one-year long drought, from Toscana to the north German border, from France to Poland. A blanket of smoke from the burning forests covered the continent, just like we saw in Russia in 2010. Then came the anti-summer in 1588: It rained and storms raged during 88 of 92 days. The grape harvest could fit in a hat. We had never seen such a summer, wrote the admirals of the Spanish Armada, it was like the British fleet that struck back then in the English Channel.

How can people be blamed for bad weather?

When the weather was continuously cold and wet, as was the case this spring, those who were hit needed to find someone to blame. In most cases it was women who were accused of witchcraft. The accusers often assumed a conspiracy of witches who had sexual misconduct with the devil was at work. For this reason, suspects were tortured until they named their co-conspirators, who then were next. Entire groups of women were burned at the stake. Today we estimate that from 1430 to 1650 in Europe 60,000 women were executed as witches, not only because of, but most often because of weather-sorcery. It cannot be excluded that during that time, witches would have been burned after having a spring like that of 2013.”

Today hysterical climate alarmists blame industrial witches for today’s weather misfortunes, and accuse them of having a pact with the devil. These alarmists claim that they have science on their side and that they know the truth.

Today in modern times the psychological affliction of weather hysteria still persists with many lawmakers, scientists, and activists demanding that people start performing rituals in order to get Nature to bestow nicer weather. Back to the Dark Ages!

14 responses to “Climate History Professor: Bad Weather In History Was Also Blamed “On A Conspiracy Of Witches””