Sometime in the last year, someone commented in some article that sea level rise as observed by satellite radar altimetry was overstated due to the fact that as warm water expands, it gets lighter, gravity has less pull on it, and it bulges up. Since then, a couple of global maps have come to my attention. First, a map of sea level rise. 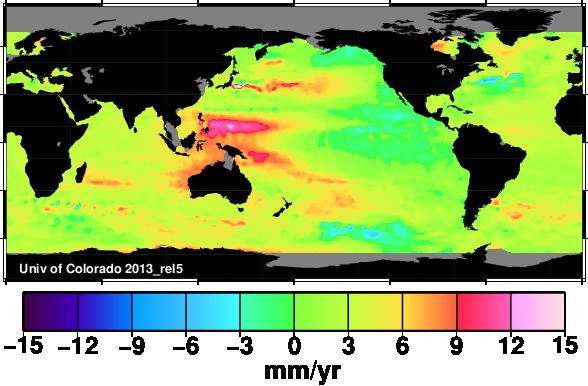 Now compare this to the ocean heat content anomaly map for roughly the same period. 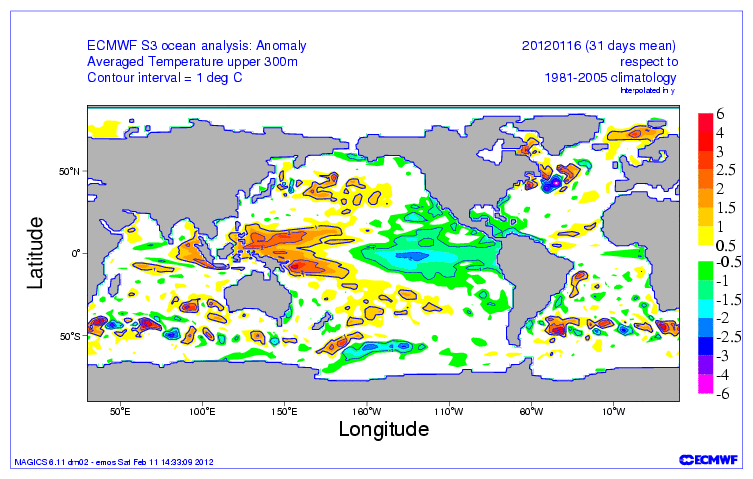 They look alike, don’t they? The colors in most of the two map areas match. They would match almost exactly if the scale colors were the same. But they are supposed to be measuring different things. But where there is ocean heat (red and orange) in Figure 2, there is sea level rise (red and orange) in Figure 1. Conversely, where the ocean is cooler it is lower. Hot is higher sea level, cool is lower sea level. The western Pacific is warmer and higher than the eastern Pacific. The warm current east of Japan is higher in sea level. Cool spots in the Southern Ocean are lower in sea level.

As was suggested in the first paragraph, as a particular spot in the ocean warms, like the western Pacific warm pool, the surface expands upward. This has nothing to do with most of the coastlines of the world. Where the water is shallow, the slight expansion will not be noticed. As you can see on the map, sea levels all along the west coast of the Americas, and some other areas, are falling because those ocean areas are cooling. For other coastal areas, sea levels are rising slowly, at about the rate measured by tide gauges since the 19th century, 1.7 mm/year.

Sea level rise as measured by satellites is measuring mid-ocean sea level heat differences. The most glaring example is the western Pacific warm pool. They are not measuring coastal sea levels where people live. In fact, the satellite radar altimetry measurements specifically reject measurements within 50 km of a coast.

All of this means that radar altimetry is useless for measuring sea level that makes any difference to infrastructure planners. It is only useful as another CAGW bogeyman. The University of Colorado even admits this here, (my emphasis):

“GMSL is a good indicator of changes in the volume of water in the oceans due to mass influx (e.g., land ice melt) and density changes (e.g., thermal expansion), and is therefore of interest in detecting climate change.”

Coastal infrastructure planners don’t care about volume, they care about depth, at the shore, at high tide, and that has nothing to do with “climate change”.