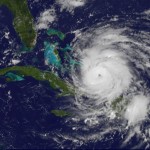 Share this…FacebookTwitterIt’s now halftime for the 2013 hurricane season (June 1 – November 30) and German meteorological site wetternet.de writes that “Hurricanes are less than expected“. Hurricane Irene, 2011. Photo by NASA Using the mean of the 1981 – 2010 period, normally three or four tropical storms form in the Atlantic in August, with one […]