German Professor: IPCC Science Finds Itself In A Serious Jam…”5AR Likely To Be The Last Of Its Kind” 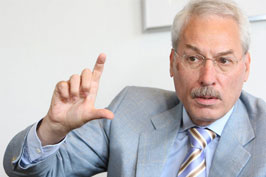 And: “Extreme weather is the only card they have got left to play.”

So says German Prof. Fritz Vahrenholt, who is one of the founders of Germany’s modern environmental movement, and agreed to an interview with NoTricksZone. He is one of the co-authors of the German skeptic book “Die kalte Sonne”, which took Germany by storm last year and is now available at bookstores worldwide in English under the title: The Neglected Sun.

In Germany Prof. Vahrenholt has had to endure a lot heat from the media, activists, and climate scientists for having expressed a different view. But as global temperatures remain stagnant and CO2 climate sensitivity is being scaled back, he feels vindicated. Here’s the interview:

IPCC Science Finds Itself In A Serious Jam, There Is Not Going To be A Climate Catastrophe

NTZ: You were once a believer in the man-made CO2 climate disaster. What changed your mind?

FV: I was Environmental Senator of Hamburg until 1998 and had had absolutely no doubts about the AGW hypothesis because global temperatures indeed had been running parallel with CO2 emissions. My first doubts over the IPCC’s science arose after the dramatic errors of the 2007 4th Assessment Report came to light. On German public television PIK Director Hans-Joachim Schellnhuber said the Himalayan glaciers would melt away by the year 2035. Then as a CEO of Shell Repower Systems, and later RWE Innogy, where I was responsible for the development of renewable energies and discovered that natural factors were impacting our climate. We saw that the wind strength in Northwest Europe had been in decline year after year. Yet, climate scientists had told us just the opposite was supposed to occur, i.e. that wind strength would increase. So I looked at the literature in detail and was able to find there was a relationship with the North Atlantic Oscillation, whose 60-year cycle had entered a weak phase. I wrote articles about this in leading German dailies, and I was immediately branded as a “climate denier” by Stefan Rahmstorf. His reaction led me to look even deeper into the literature. In the end it was Schellnhuber and Rahmstorf who turned me into a skeptic.

NTZ: Your climate science critical book Die kalte Sonne (The Cold Sun) was released early last year in Germany. It remained on the Spiegel bestseller list for 3 weeks. Has it changed the discussion in Germany? Were you surprised by the public’s reaction?

FV: The leftist, liberal media labeled me an “eco-reactionary” who represented obsolete positions. That was to be expected. What truly surprised me the most was the harsh reaction from German climate scientists who were not even willing to discuss the topics addressed in the book. And the longer our book remained on the bestseller list, and the longer the warming stop became, the more our adversaries’ tactics ran aground. First they ignored us and then they tried to isolate us through personal defamation. Die kalte Sonne became the symbol of resistance against a politically indoctrinated science which denied natural processes and spread fear in order to promote a particular energy policy – one that threatened the prosperity and growth of the German industrial base. So to me it was a sort of an accolade when former Chancellor Helmut Schmidt invited me to a personal audience to find out more about Die kalte Sonne. Now I’m permitted to quote him: “Lüning’s and Vahrenholt’s assertions are plausible“. The UK Chancellor of the Exchequer Nigel Lawson invited me to London and encouraged me to publish the book in English. Now it is appearing this week as “The Neglected Sun“. It’s the Die kalte Sonne in English, and it’s been updated. 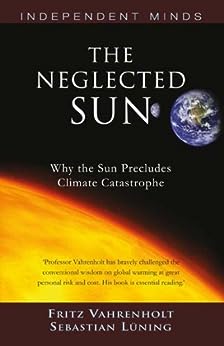 NTZ: CO2 is supposed to be trapping heat in the atmosphere, yet global atmospheric temperatures haven’t risen in 200 months (over 16 years). Where has all the “trapped heat” gone? Some leading scientists are frustrated that they cannot find it. What do you think is happening?

FV: It’s now obvious that the IPCC models are not correctly reflecting the development of atmospheric temperatures. What‘s false? Reality or the models? The hackneyed explanation of a deep sea warming below 700 meters hasn’t been substantiated up to now. How does atmospheric warming from a climate gas jump 700 meters deep into the ocean? If you consider the uncertainties in the Earth’s radiation budget measurements at the top of the atmosphere, and those of the temperature changes at water depths below 700 meters, where we are talking about changes of a few hundredths of a degree Celsius over many years, such a “missing heat” cannot be ascertained today. The likelihood is that there is no “missing heat”. Slight changes in cloud cover could easily account for a similar effect. That would mean the end of the alarmist CO2 theory. Perhaps this is why we’ve been hearing speculation about the deep ocean.  On the other hand, perhaps this discussion tells us that the alarmist faction needs to deal more with oceanic cycles. It is possible that this is a step in recognizing the central impacts of the PDO and AMO on our climate.

NTZ: Hans von Storch confirms that 98% of the climate models have been wrong so far. Do you think the directors of world’s leading climate research institutes risk damaging the once sterling reputations of their institutes if they do not soon admit there’s a problem with climate science?

FV: They certainly find themselves in a serious jam. That‘s why they are now trying to gain time by claiming that the models first become falsified if there has been no warming over a period of 30 years – never mind that the warming of 1977 to 1998 was only 22 years and deemed to be long enough to “prove“ the CO2 theory. A few years ago climate scientist Ben Santer said only 17 years were necessary before we could talk about a real climate trend. Now that reality is pulling the rug from under models, some scientists are having misgivings. Some are praying for an El Nino year, which would allow them to beat the drums of fear again. They’ll hype up every single weather effect to get attention.

NTZ: Some prominent climate experts have been expressing second thoughts about the seriousness of man-made climate change, e.g. Hans von Storch, Lennart Bengtsson. Do you expect more scientists to follow as more data come in?

FV: Certainly. That’s what’s so fascinating about science. It proposes theories. And when they don’t fit reality, they get changed. The chaff gets separated from the wheat.

NTZ: Spiegel for example has been publishing some articles critical of alarmist climate science. Do you expect the rest of Germany’s media to soon follow and to start taking a more critical look?

FV: This process is fully under way. But it’s going to take a long time because an entire generation has been convinced that CO2 is a climate killer. But the shrill tones have been quieting down.

NTZ: What danger does Germany face should it continue down its current path of climate alarmism and rush into renewable energies?

FV: Twenty billion euros are being paid out by consumers for renewable energies in Germany each and every year. Currently that amounts to 250 euros per household each year and it will increase to 300 euros next year.

Worse, it’s a gigantic redistribution from the bottom to top, from the poor who cannot afford a solar system to rich property owners who own buildings with large roof areas. The German Minister of Environment fears a burden of 1000 billion euros by 2040.

It is truly outrageous that 1) 40% of the world’s photovoltaic capacity is installed in Germany, a country that sees as much sunshine as Alaska, 2) we are converting wheat into biofuel instead of feeding it to the hungry, and 3) we are covering 20% of our agricultural land with corn for biogas plants and thus adversely impacting wildlife. We are even destroying forests and nature in order to make way for industrial wind parks.

On windy days we have so much power that wind parks are asked to shut down, yet they get paid for the power they don’t even deliver. And when the wind really blows, we “sell” surplus power to neighboring countries at negative prices. And when the wind stops blowing and when there is no sun, we have to get our power from foreign countries. In the end we pay with the loss of high-paying industrial jobs because the high price of power is making us uncompetitive.

The agitators in climate science here in Germany have done us no favors. Renewable energies do have a big future, but not like this. It’s been a run-away train and it’s too expensive. We are putting Germany’s industry in jeopardy. In reality there really isn’t any urgency because the solar cycles and nature are giving us time to make the transition over to renewable energies in a sensible way.

NTZ: Has the weather become more extreme? Why are we getting bombarded by scary reports from the media – even after a normal thunderstorm with hail?

FV: Extreme weather is the only card they have left to play. We see that Arctic sea ice extent is the highest since 2007. At the South Pole sea ice is at the highest extent in a very long time, hurricanes have not become more frequent, the same is true with tornadoes, sea level is rising at 2-3 mm per year and there’s been no change in the rate, and global temperature has been stagnant for 15 years. Indeed we are exposed to bad weather. And when one is presented with a simplistic explanation, i.e. it’s man’s fault, it gladly gets accepted. CO2 does have a warming effect on the planet. However, this effect has been greatly exaggerated. The climate impact of CO2 is less than the half of what the climate alarmists claim. That’s why in our book, The Neglected Sun, we are saying there is not going to be any climate catastrophe.

NTZ: What do you expect from the soon-to-be-released IPCC 5th Assessment Report?

FV: It is truly remarkable that some countries are urging IPCC 5AR authors to address the reasons for the temperature hiatus in the summary for policymakers. Dissatisfaction with the IPCC’s tunnel vision is growing. But let’s not kid ourselves: In the coming days and weeks the media are not going to be able to refrain from the IPCC catastrophe-hype. However, what will be different from the previous four reports is that the hype will die off much more quickly. Those who ignore nature and its fluctuations will end up on the sidelines soon enough. I think this is going to be the last report of this kind.

Professor Dr Fritz Vahrenholt is a German scientist, environmentalist, politician and industrialist. With his initial Doctorate in chemistry, Prof Vahrenholt has researched at the Max Planck Institute for Carbon Research at Mulheim. A former Senator and Deputy Environmental Minister for Hamburg, he has served on the Sustainable Advisory Board successively for Chancellors Gerhard Schroeder and Angela Merkel.

19 responses to “German Professor: IPCC Science Finds Itself In A Serious Jam…”5AR Likely To Be The Last Of Its Kind””