Polar scientist Dr. Peter Lemke of Germany’s renowned Alfred Wegener Institute was interviewed here about climate change, its affect on the Earth’s polar regions and about his recent winter expedition to Antarctica.

In the Arctic part of the interview, Lemke repeats the usual man-is-melting-the-Arctic narrative that you often hear from many state-funded alarmist climate scientists. No surprise here.

But as always, when it comes to sea ice, eventually warmist polar scientists get tripped up by Antarctica. And sure enough, Lemke trips and stumbles when Antarctic sea ice gets brought up. Before too long he is forced to concede he is stumped and has to admit that sea ice at the South Pole has grown and that he has no real explanation.

“…from our early results, it looks like that the sea ice mass around Antarctica has increased slightly. Our measurements showed that the sea ice was more extensive, thicker and more densely packed as compared to our 1992 expedition, which was on the same track during the same season.” 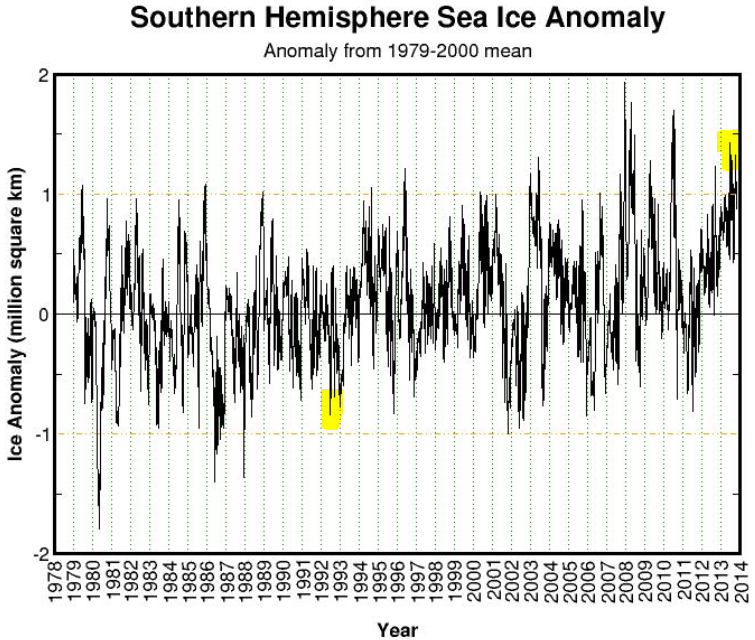 It’s obvious that Lemke is attempting to seriously downplay the Antarctic sea ice growth that has occurred since 1992. Indeed the above chart shows that sea ice has grown by more than 1.5 million square kilometers. That’s not increasing “slightly”.  We suppose that if the trend had been the other way around, we’d be hearing terms like considerable reduction or even possibly dramatic reduction.

So why is the ice growing? This goes against all the claims of global warming. Here, typical of warmist scientists who are confronted with inconvenient data, Lemke acts like he has the answer…before admitting he really has no clue (my emphasis):

One explanation is that in the Southern Hemisphere the westerly winds are increasing, and through friction this drives the ice towards lower latitudes and the extent is getting a bit bigger.  When the ice expands there is open water between ice floes, and it’s still cold enough in winter that ice freezes in the open patches.

There are other physical processes that may be involved, such as the heavy snow cover that blankets the Antarctic sea ice. Sometimes the heavy snow load submerges the ice floe underwater so that the interface of ice and snow is actually below sea level, and seawater drains into the snow and freezes. That may be one process, but there are others that are not really resolved yet.

We don’t yet have the answers to these questions, because there are very few measurements and you cannot deduce snow from satellite remote sensing data, yet. To find out, you have to go there and make measurements yourself. But winter expeditions are very rare. There are very few icebreakers that can actually go into the Antarctic winter into the sea ice.”

The science is settled, except for the majority that isn’t.

Never trust a climate scientist who acts like he’s sure. It’s a dead give away that he hasn’t got a clue about what’s really going on.