Share this…FacebookTwitterCold is gripping globally, and not only in the US or Antarctica. Hat-tip: Jurian Sterk at Facebook. The French language www.hebdometeo.com here reports that in Alberta: “Temperatures Saturday in the Canadian prairies were glacial and that many cold records fell.” The report writes that Edmonton bottomed out at -39°C thus smashing the old record of […] 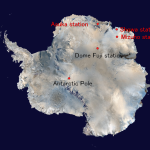 Share this…FacebookTwitterThe German language Voice of Russia here wrote yesterday that US scientists had recorded, by satellite, a new all-time record low of -91.2°C in Antarctica. The reading was taken at the Japanese research station Dome Fuji, 3786 meters above sea level in 2004. The old record was -89.2 set in 1983. Where’s the warming! […]