Many readers will recall the climate bet for charity this site and its readers (the coolists) entered into against the climate alarmists, principally climate loudmouth Dana Nuccitelli and Rob Honeycutt, back in January 2011.

The coolists maintain that the 2011 – 2020 decade will be the same or cooler than the 2001 – 2010 decade. The alarmists of course are absolutely convinced that the current decade will be warmer.

Listening to the media lately, one might think that the coolists are getting trounced. Nothing could be further from the truth. The bet is based on the RSS and UAH satellite data, and they tell us a different story. Nuccitelli and his buddies can cite NOAA, GISS or NCDC all they want, but those datasets are not going to matter come 12/31/2020.

Robin Pittwood of the Kiwithinker has been so kind to tabulate the race so far as it develops. The first four years of the decade are now behind us, and Robin tells the coolists are maintaining a slight lead. Yes, this decade so far is running COOLER than the previous one! Hardly a good development for the Nuccitelli & Co. The dang oceans must have eaten up all the heat. 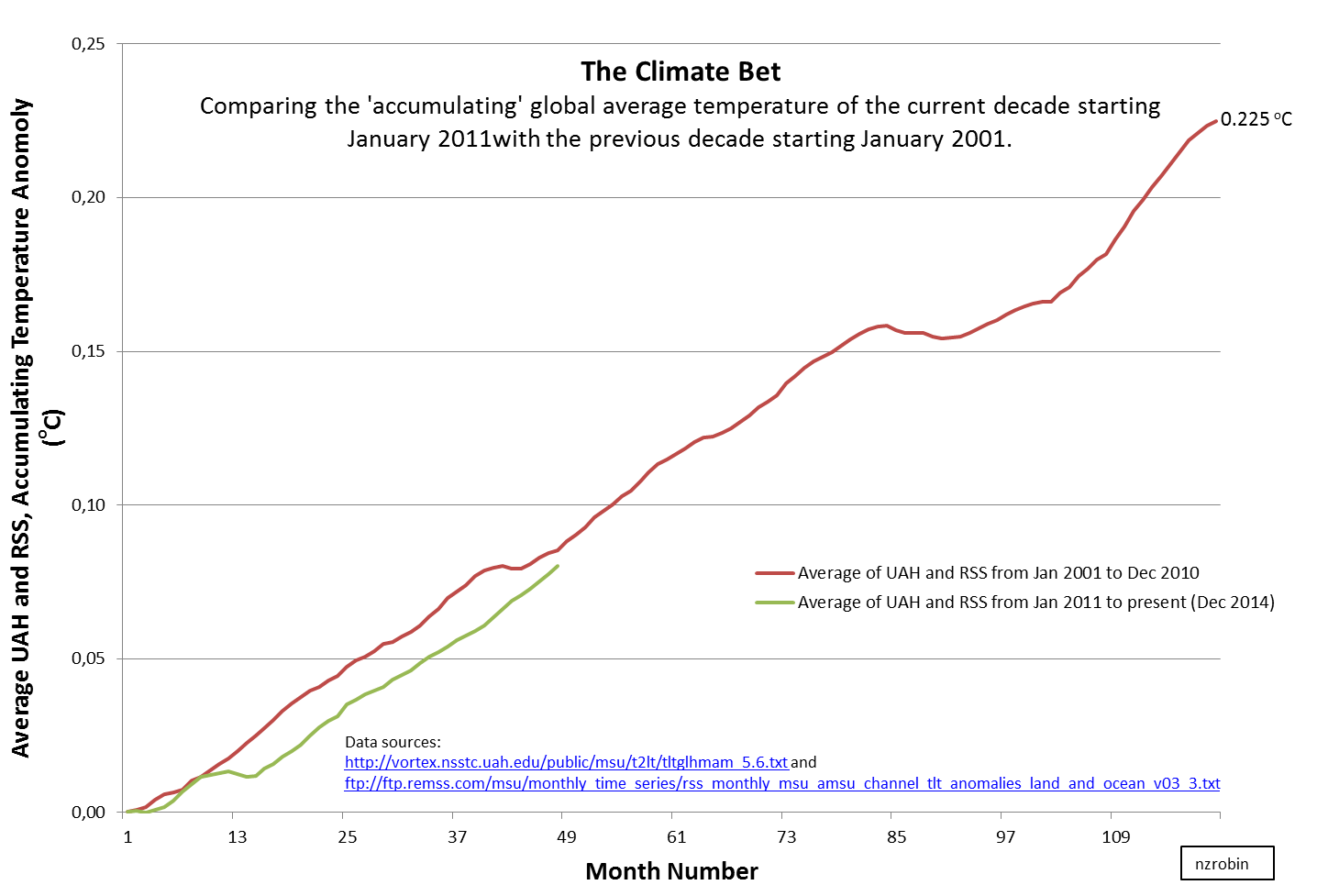 Chart shows this decade continues to be cooler than the previous one. Source: Robin Pittwood of the Kiwthinker.

With the current CO2 emissions trajectory running at the IPCC’s worst case scenario, this decade so far theoretically should have been at least a good 0.2°C warmer, and certainly not cooler. Something must have gone terribly wrong for the cocky climate boy-wonder in California.

We are now 40% through the race … and clearly it is still close with the coolists in the lead by half a nose.

Now back to the hype we’re hearing about the ‘hot’ 2014. Notice that during 2014 (months 37 to 48) the green line just keeps trucking along at the same basic slope as it has for the past few years and much of the previous decade too. There was even a small El Nino in 2014, whose effect is conspicuous by its absence. Maybe the heat that is missing in the observed atmospheric temperature trend is hiding in the ocean?  ;-)”

So we’ve got another 6 years to go and now is a good time to speculate how those might go. Personally I expect 2015 to be a warm one as well, because of the current Tiny Tim El Nino. But then we all know what happens after an El Nino. Right, global temperatures tend to drop due to La Nina that follows.

Also boding ill for Nuccitelli and Co. is the projection that the current solar cycle will soon be winding down and so it is quite possible we will be seeing a cool period around 2018, similar to what we saw back around 2008. Indeed it’s too early to call it for the coolists, but I must say I’m quite comfortable with our current position.

Let’s assume that the coolists do win the bet and thus deliver the major upset. How will the warmists react? Are they going to cry foul? Or are they going to be relieved and a bit happy because the planet is not warming like they thought. That would be the rational reaction.

I doubt very much Dana is sweating about this at all. He’s a master rationalizer and will creatively concoct a way to deny it.

Awhile back at this site William “Winston” Connelly demanded that the terms of the bet be modified. Sorry, it is a bit late for that, and it’s not his bet anyway.

Should the coolists win, the warmists are going to have a lot explaining to do. But they are well prepared, as already there is a huge supply of excuses out there for them to choose from.

And even if the warmists should somehow eke out a victory, it’ll be quite a hollow one because they all claimed it would be min. 0.2° warmer. A few hundredths warmer would also take the air out of the alarmism.