What follows is photo-shopping taken to an extreme.

It’s little wonder few people believe anything the mainstream dailies write when it comes to climate change. Time and again they’ve been exposed to be unloading barges of BS onto their readers.

Reader Jim sent an e-mail bringing attention to probably the most amateur photo-shopping work on behalf of global warming propaganda I’ve seen in a long time, all used by eco-journalist Peter Hannam of the Sydney Morning Herald in a piece about the coal-fired Liddel Power Station in Hunter Valley, NSW.

Not only is the photo totally manipulated with the aim of deceiving readers, but Hannam’s facts are just as misleading as the photo-shopped power plant image itself: 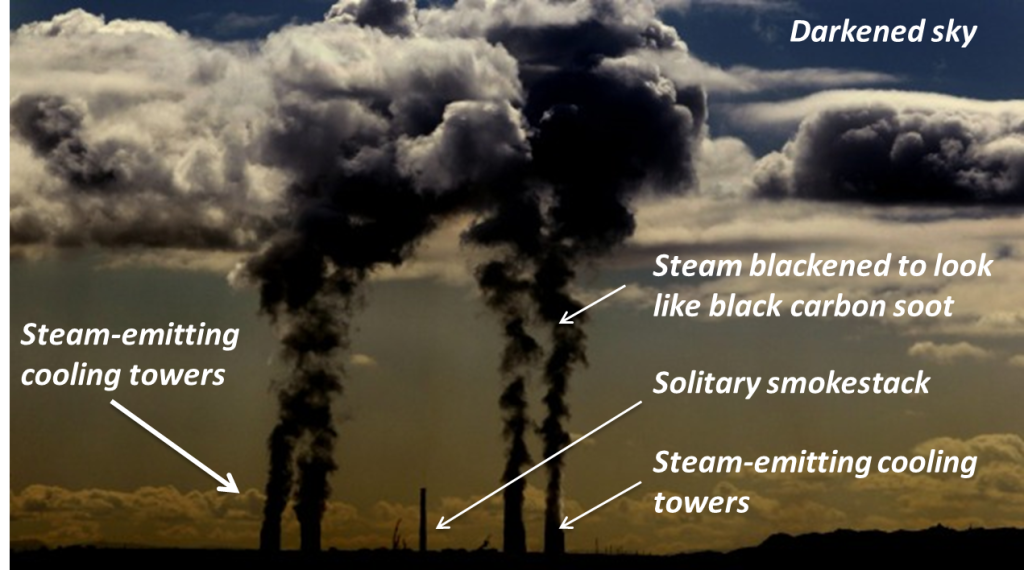 Glaring photo-shopped image by Jonathan Carroll gets used by the SMH to produce impression that the Liddel coal power plant is causing disease at an epidemic proportion. Original photo: Jonathan Carroll.

Note how the steam emitted by the power plant’s cooling towers is a sinister black. Since when is water vapor black? Hannam obviously is unable to distinguish between the smoke stack and the cooling towers. The scant emissions from the single smokestack in the center of the image shows just how clean coal power plants have become.

The photo also tells the many readers residing in the northern hemisphere that skies down under have very weird colors.

Hannam reports on an activist group of doctors who using a dubious formula claim they have succeeded in putting a figure on the health damage the power plant causes: $600 million annually.

The Coal and Health in the Hunter report by the Climate and Health Alliance estimates that burning coal for electricity in the valley alone produces health damage in the order of $600 million annually from the resulting air pollution, including the release of small particles.”

However, as reader Jim points out, a quick search of health statistics from Hunter New England Health (which covers the Hunter Valley) shows that Hannam’s claims are dubious at best. What follows is a chart showing the causes of death for all respiratory ailments:

The above chart shows that deaths due to respiratory ailments are primarily caused by lung cancer (smoking) and Chronic Obstructive Pulmonary Disease (COPD) which is in part related to pollution. Deaths from COPD, which to some extent are linked to the emissions from coal power plants, have been declining over the last 15 years.

Deaths due to asthma, a disease that could certainly be exacerbated by pollution, shows no trend.

Why would any reader believe anything Hannam writes? Using doctored images and dubious statistical methods, he is obviously attempting to fabricate a health crisis that does not exist.