The Potsdam Institute for Climate Impact Research has been loudly trumpeting its latest paper on Atlantic ocean overturning circulation today, claiming there’s been an “exceptional twentieth-century slowdown“. The authors, who include Stefan Rahmstorf and Michael E. Mann, even suggest that the “possible cause of the weakening is climate change“.

Some sites, like Climate Central here, have been unable to contain their glee over the news of the potential climate-change induced oceanic shifts being served up by the PIK. For example the site called the findings “dramatic” and writes (my emphasis):

If the climate relationships identified by the researchers, led by the Potsdam Institute for Climate Impact Research in Germany, hold true, growing melt rates in Greenland ‘might lead to further weakening of the AMOC within a decade or two, and possibly even more permanent shutdown’ of key components of it, the scientists warn in their paper.” 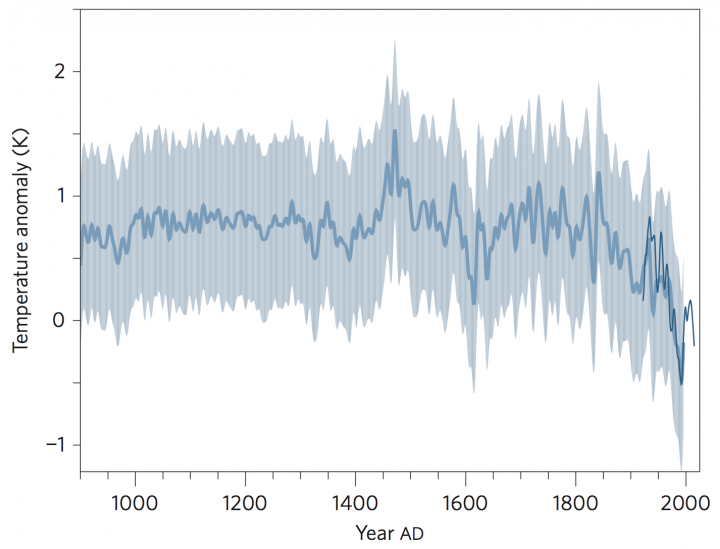 Spiegel and the FAZ pour cold water on paper

Fortunately other media sources have been somewhat more critical and report that there’s skepticism on the paper – coming from warmist circles, no less.

Germany’s Frankfurter Allgemeine Zeitung (FAZ) here for example writes that Rahmstorf is puzzled that a part of the north Atlantic has cooled over the last 100 years: “The cooling was stronger than what most computer models calculated it would be,” the FAZ reports. Models wrong again!

The FAZ then writes that, “An independent expert assesses the estimation skeptically”, adding:

Climate scientist Martin Visbeck of the GEOMAR Helmholtz Centre for Ocean Research in Kiel sees Rahmstorf’s assertion of the results critically: ‘The study’s focus on the sub-polar part of the Atlantic and the spectral analysis are interesting,’ he says. But there are other AMOC assessments that point to a completely other development. The paper does not offer any strong indication of the development of the AMOC during the past fifty years.”

When a warmist dismisses another warmists’s science, then you know it’s likely pretty slipshod.

Der Spiegel reports that the study is lacking

Spiegel reminds its readers: “Most studies are assuming that the current is in fact stronger.” Spiegel continues:

The temperature fluctuations could also be a ‘temporary natural variation,’ Hofstätter told the online service of the ORF. The measurements covered a time period that was too short to allow concrete forecasts.”

Other websites censored reports of skepticism and uncertainty

For example the end-of-climate conspiracy theorists at German alarmist site Klimaretter of course could not be bothered to mention the study is disputed even by fellow warmist scientists.

Michael Mann also did not want to hear any non-alarmist opinion as well. At Facebook he blocked fair comments left by Jaime Jessop, who kept a screen-shot:

Mann removed my comments (of course) & his reply on FB re. THC slowing on – but not before I took a snapshot: pic.twitter.com/iIEVib8lcO

Overall the latest paper by Rahmstorf and Mann did not even survive birth.