Depending on which global temperature data one looks at, temperatures have not increased in the last 18 or so years. The reasons proposed have been various, ranging from natural cycles to increased aerosols, to heat escaping to space or the deep ocean.

Perhaps there are some other reasons that have not been considered. The following is a simple list, with illustrations. The list is divided into two sub-lists. Things that are natural and things that are anthropogenic or man made. 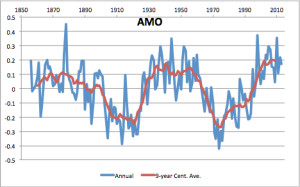 The AMO has been at the top of it’s warm phase since 1998. The index doesn’t get much higher than it is now. It can only go down from here. It was at a similar peak during the warm 1930s through the 1960s. It was negative during the cool 1970s. The peaks of the AMO tend to be flat for a couple of decades before flipping cool. We don’t know what drives the AMO. Data here. 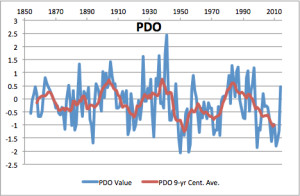 The PDO has been trending down since the early 1980s. It also was up during the 1930s and negative during the 1970s. The AMO and the PDO are the natural ocean cycles that climate scientists talk about. The PDO reached a peak in the 1980s and has been declining since. This index is volatile. The PDO has a huge effect on weather on the Pacific Coast of North America. Data here.

3. It’s The AMO and PDO together 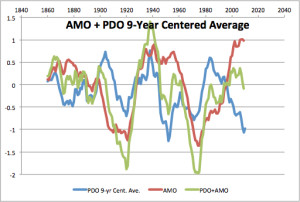 They are sometimes roughly added together. (Even though they are not measuring the same thing.) If one adds them together, it can be seen why the late 1930s were warm and the 1970s cool. The sum (green trace) reached a peak in 2000 and is now declining because of the declining PDO. (Computed by author.) 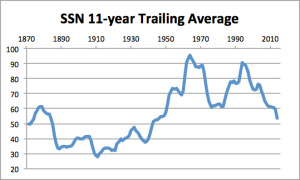 The sunspot number (SSN) average has declined since the mid-1990s. One can see a cause for the 1970s cooling in the SSN, but not for the 1930s warming. The early 20th century cooling may have been caused by the low SSN around the turn of the century. The sun is excused for the recent pause because the total solar index (TSI) changes only by a fraction of a Watt/m2 over large changes in SSN. But other factors may be in play. (Source: WDC-SILSO, Royal Observatory of Belgium, Brussels.) 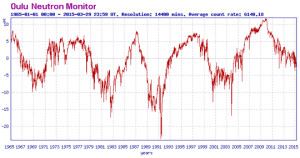 The neutron count is an indicator of the cosmic ray flux at the top of the atmosphere. Here is the neutron count at Oulu, Finland since 1965. It is thought that cosmic rays seed cloud formation. Therefore high recent count is providing cooling clouds. Graphic downloaded from here, the Sodankyla Geophysical Observatory, University of Oulu, Finland. 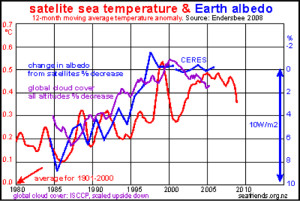 Albedo and cloud cover reached a peak in the 1998-2000 era, at the beginning of the pause. Clouds, especially high clouds, reflect solar energy. Each 1% of albedo change translates to 1 W/m2. There is another graphic of albedo from the EarthShine project, here. All the albedo data show a significant rise in albedo after 1998. The cosmic ray/neutron count may not match the albedo/cloud cover, but cloud cover really did increase. Graphic used by permission of Dr. J. Floor Anthoni, and seen here.

I mean by anthropogenic that man may have caused the pause by manipulating the temperature data. These manipulations seem to enhance the warming trend in support of politics, though the stated intent for many was to enhance accuracy. Here are some examples: 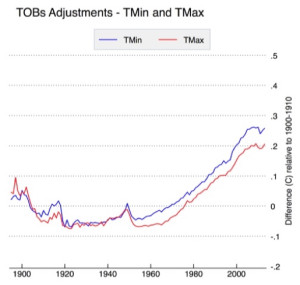 Observing times have been gradually changed from afternoon to morning hours. The bias from this adjustment was about 0.2°C for TMax and 0.25°C for TMin. This impacts the historic data, but also, this adjustment is now finished. Most measurement sites now use morning observing times and no more changes will be made, hence the pause. No more warming will come from this source. The TOBs adjustment is clearly visible in the DIFFERENCE BETWEEN RAW AND FINAL USHCN DATA SETS graphic below, though it is only half of the total. Figure from here. 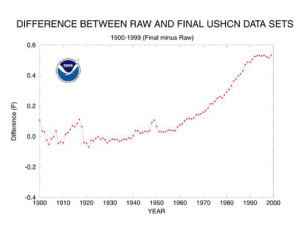 8. It’s all adjustments including TOBs

This graphic shows the result of all adjustments: homogenization, sensor changes (CRS vs MMTS), and TOBs. Note also that the warming due to all these changes is about 0.5°C, much of the warming that is supposed to have taken place since 1950. Note that these changes went flat during the 1990s decade.  Note the similar shaped curve to the TOBs adjustment with a flat shape in recent times. There should be no more warming from this source. Figure from NOAA/NCDC here.

9. It’s the number of stations 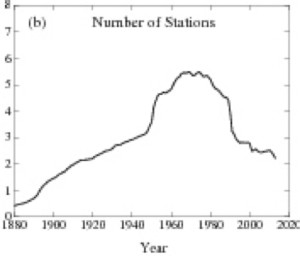 Since 1980, the number of stations reporting temperature data has declined by half. Some of the decline was due to the collapse of the Soviet Union. This resulted in loss of data from the Russian high arctic and Siberia, among the coldest land stations in the Northern Hemisphere. Some of these stations have resumed reporting in recent years, but most have not.

Other stations in Africa and Asia were closed by newly independent former colonies. World-wide, many stations closed instead of being upgraded. On average the remaining stations are at lower elevations and in warmer, populated areas. This situation has now stabilized. Figure from NASAGISS here. A discussion of this problem is here.

These are nine possible reasons for the pause. One or two are sufficient. Nine is overkill.

27 responses to “What Caused the Global Warming Pause or Why Hate the Hiatus?”