The last two posts were getting a lot of traffic, and so yesterday I decided to take the day off and let them run. Today I’m back with the next post, which is also about the wind energy folly.

Resistance to the junk green energy is growing in Germany. 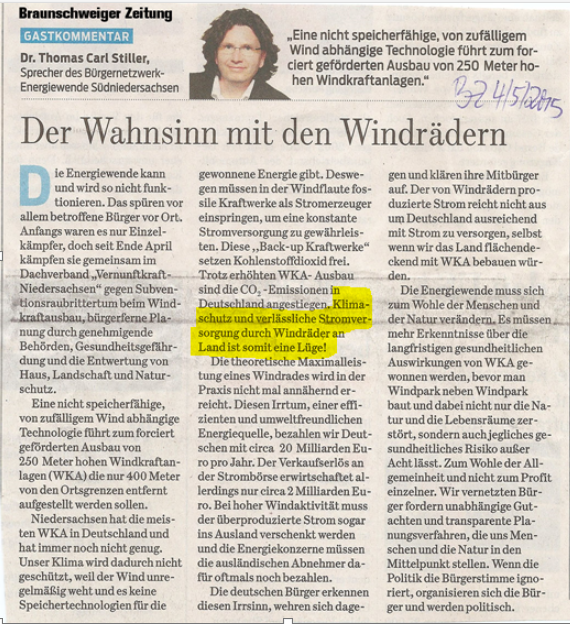 In the commentary Stiller says that Germany’s once highly ballyhooed Energiewende (transition to renewable energies) “cannot and will not function“, and what was once only a few single protesters voicing opposition to wind parks, is now an entire nationwide umbrella organization of protest groups against the “subsidy-robbing empire” of wind energy industry.

Stiller describes a technology whose produced energy cannot be stored and which depends on random, unpredictable winds. The technology is so inefficient that builders are now forced to erect 800-foot tall monster size machines in a desperate effort to extract real power. He also writes that “wind energy has done nothing to combat climate change”.

Despite increased wind energy installation, CO2 emissions in Germany have risen. […] Climate protection and reliable power supply by wind turbines installed on the land is thus a lie.”

What’s encouraging is that Stiller writes: “German citizens are waking up to this insanity“. He comments that “wind energy would not be able to supply the country even if the entire country were covered with wind turbines“.

Stiller also calls for more research for the health impacts that wind turbines are having and that the energy source has got to be for the good of the public and not profit a few opportunists. He adds:

Us organized citizens are demanding independent feasibility studies and calling for more transparency during the planning process and that man and nature be put back in the focus.”