Analysis Shows Current Warming Is NOT Unprecedented …It Is Not Even “Unusual”!

The climate calamity crowd claims that the warming we experienced in the Twentieth Century is unprecedented… it has never happened before in human history. Because we didn’t have thermometers until about 300 years ago, and even then records exist from just a few locations, it is difficult to prove that this is not so.

The only reliable temperature record we have with continuous reasonable resolution data is the ice core oxygen isotope data from Greenland. I downloaded the GISP2 data and did a point-by-point difference calculation, computing the warming and cooling trend between each data point, and produced this plot. 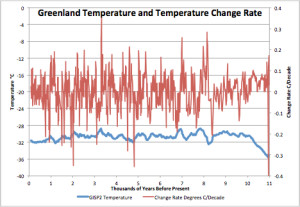 Figure 1 is a plot (blue) of the GISP2 temperature data and the calculated warming or cooling (red) between each point expressed as change (warming or cooling) per decade. The horizontal scale is in years before present. Because Excel places zero on the left side and counts up to the right, the present is on the left.

There have been 73 warming periods…

Temperatures in the Holocene have been quite volatile. Excel counts in this data 73 warming periods of at least 0.1 degrees per decade, and 80 cooling periods of that same amount. The time resolution of the points in the data are from about six years to about twenty years, so many of these warming and cooling periods are short. But some span a century or longer as we will see in figure 2.

I processed the HADCRUT4 data set to six year resolution to simulate the ice core data here. The highest warming was in the six year period from 1975 to 1981, a rate of 0.27°C/decade. There were two periods in the ice core data with higher warming rates, one was in 1370 BCE where in a 12 year period the warming rate was 0.357°C/decade. This period was bracketed by similar length periods with 0.25 and 0.16°C/decade warming periods. This 34-year period saw a warming of nearly a degree (0.98°C) far exceeding the warming in the late Twentieth Century.

Another period 8200 years ago (6200BCE) saw a 1.667°C warming in 71 years. The people around at that time must have been truly panicked at the rapid climate change and probably blamed it on the invention of beer.

Here is a chart of the ice core temperature and HADCRUT4 together as an anomaly plot using the same baseline period, spliced at 1850-55, the only years they have in common. 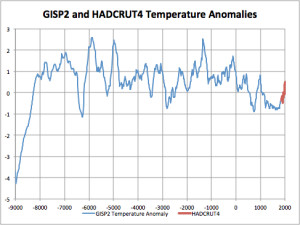 Figure 2 is a plot of the ice core (GISP2) and HADCRUT4 as an anomaly plot. The vertical scale is in degrees C. The horizontal scale is calendar years with the present on the right.

HADCRUT4 is the thermometer-measured, small, red, “Hockey-stick” at the right side. All the excitement is about half of that red uptick. The big question: Is it natural, or CO2?

In Figure 2, many heating and cooling periods with high magnitude and longer duration than the current warming are seen. The two periods described above are seen at 1400BCE and 6200BCE, but there are others scattered across the plot. The current warming appears puny in comparison and only half of that is in any way attributable to CO2.

Some detractors have tried to make the point that Greenland ice core data only reflects Greenland temperatures. This isn’t quite correct on several counts. Oxygen isotope fractionation acts at three places: the area of evaporation and the points of condensation and precipitation. These phenomena are latitude dependent and the evaporation area is diffuse. So the ice core data reflects temperature at Greenland’s latitude.

Another point (though it only applies to the first 3000 years on this chart) is that during the Ice Age, the ice sheets removed so much fresh water from the oceans that it increased the salinity of the remainder, affecting surface oxygen isotope levels. This is also factored into the temperature calculation (link). Also, the ice core temperature data is averaged over the years represented at each section of core. This temperature represents climate over those years and not weather. The last point is that heat exchange between Greenland latitudes and the oceans, and thus the rest of the globe, insures that Greenland temperature cannot be far from reflecting global temperature.

A larger point is that the current warming is not unusual. Even greater warming has occurred many times in the last 11,000 years. It has been as much as two degrees warmer than now three times in the last 10,000 years. More important, warming episodes are followed by cooling episodes that can be disastrous for mankind. The long-term trend for the last 3000 years of the Holocene has been cooling. We are slowly sliding into the next long cold at about half a degree C per millennium.

The Excel spreadsheet used to generate the figures and calculations is here.

58 responses to “Analysis Shows Current Warming Is NOT Unprecedented …It Is Not Even “Unusual”!”