Germany’s and Europe’s first real heat wave (more than 3 days long) of the summer has pushed temperatures well above the 30°C. A so-called omega high pressure system centered over Eastern Europe is pumping hot air from the Mediterranean and Africa up across much of Europe. 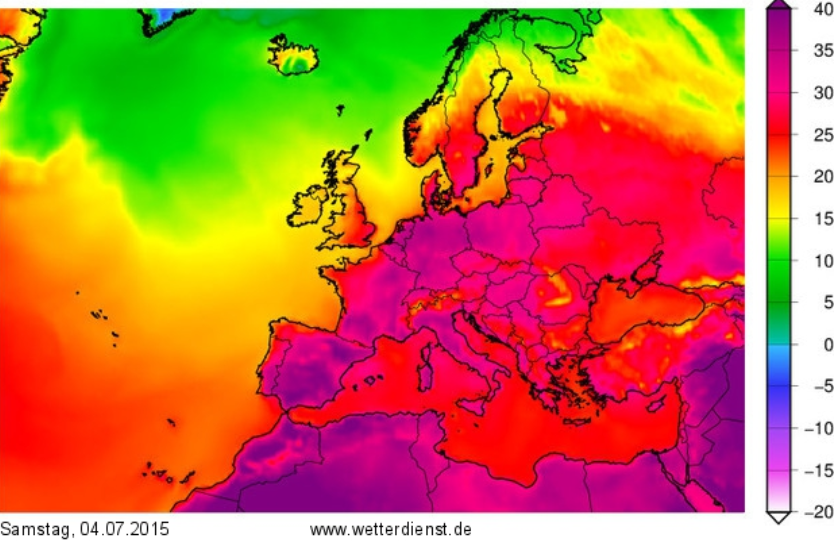 Not about to pass up any opportunity to exploit single weather events for the global warming cause, the online SVZ here cites the DWD German Weather Service, which warns that climate change will further exacerbate summer heat waves in cities, especially because of all the concrete, steel and asphalt that act as heat storage sinks that in turn serve to slow down nighttime cooling and absorb more heat in the daytime on hot days.

Can boost temperatures by 10°C!

What’s interesting here is that in the article the DWD also confirms that the urban heat island effect is real and profound, claiming that it can boost temperatures in cities “by up to 10°C”. The SVZ.de cites DWD Vice President Paul Becker, writing:

Temperatures in the city as a result could be up to 10°C higher than in the surrounding rural areas where we find bodies of water and vegetation.”

So what should this tell us about readings taken from the many weather stations located near airports and cities? Of course they have been generating exaggerated results for years. And worse, the adjustments made to the temperature record over the past years are dubious at best, especially when rural stations of the past are corrected downward and recent urban data corrected upwards.

On the subject of heat waves and their frequency, also read Judith Curry’s latest here.

By the way, Western Europe being on track for a record heat wave, like the media are claiming, is a bit of hyperbole. In Germany, the heat wave is scheduled to be over already over by Tuesday, making the heat wave about a whole 5 days long. That pales compared to the heat wave of 2003.

Naturally the alarmist Potsdam Institute here (also unable to pass up the chance to exploit the hot weather) is sure that heat waves are getting more frequent and intense because of global warming. But then again, the Potsdam Institute also claims that global warming is causing more wintertime cold waves. So you be the judge on whether or not they can be taken seriously.